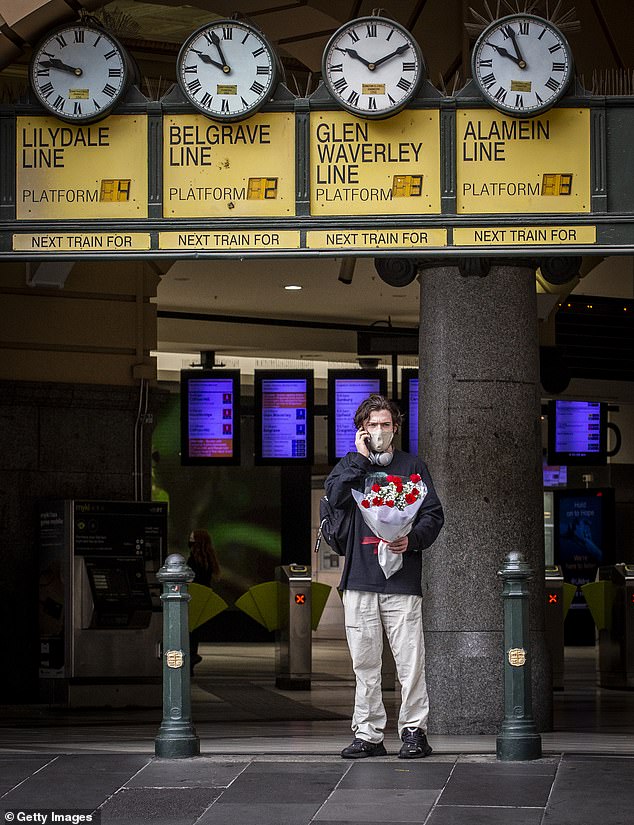 Sunday’s two new local coronavirus cases – a toddler and an unrelated hotel quarantine worker – were linked to the Holiday Inn cluster, which has now reached 16 cases.

Both had also attended a private dinner on Sydney Road, Coburg, on February 6.

The toddler’s mother has been tested three times with different test results and is also potentially infectious.

Disturbing new details emerged about the dinner party at Coburg on Sunday, with health authorities revealing 38 people had gathered for the event.

Testing commander Jeroen Weimar said a number of positive cases had been traced to the function.

He rejected claims that a woman aged in her 50s who is linked to the Coburg function had gone there instead of being in isolation while infectious.

‘The staff member was identified on Wednesday and tested positive on Wednesday this week, that is February 10,’ Mr Weimar said.

‘At that point, the social contact point of the Saturday was not identified in those early conversations.’

‘There was a negative test result that she returned as part of her normal workplace testing on the seventh but that has since been reviewed and that test is now a week positive and we have had to take the timeline back to include the sixth.’

the two new cases were linked to the Holiday Inn outbreak at Melbourne Airport, taking the total to 16 cases

The outbreak, linked to the Holiday Inn hotel at Melbourne Airport, grew to 14 cases on Saturday, after a single additional case was recorded (pictured, cleaners in PPE disinfect the hotel on Wednesday)

‘The genomics is clear that this is all part of the same strain,’ Mr Weimar said.

To encourage everyone at the function to step forward with contact tracing and testing, Mr Weimar said the owner of the venue would not be fined for a potential covid regulation breach.

‘I’m not remotely interested in who did what at what time,’ he said.

Victorian Health Minister Martin Foley said contact tracers had reduced the number of primary close contacts from the Holiday Inn cluster down from 996 to 940.

Of nearly 1000 close contacts, 129 are direct family relations of those who tested positive from the Holiday Inn exposure.

‘It is too early to say whether we have been successful, but the signs show Victorians are doing the right thing, supporting each other, and our test, trace and isolate system is staying ahead of this,’ he told reporters on Sunday.

‘But it is too early to say as yet whether this fantastic effort by all Victorians has got us there.’

‘We will continue to monitor it on a day-by-day basis, really it is up to the shared effort of all Victorians.’

Mr Foley said the child and the quarantine worker revealed as positive on Sunday had been from separate households.

The toddler has attended the Goodstart Early Learning Centre in Glenroy, but the childcare centre has not yet been added to the list of exposure sites.

Regarding the three different test outcomes for the child’s mother, Testing commander Jeroen Weimar said the experts were working on it.

‘Our epidemiologists and specialists are working with her and with our labs to be clear about the nature of what possible infection she may have, whether she is at the start of our infectious period or whether she is coming towards the end,’ he said.

‘Serology is being done, and we will work out over the next few hours exactly where this individual stands.’

One of the cases visited a Woolworths at Broadmeadows Central, in Melbourne’s north, between 12.15pm and 12.30pm on February 2.

The person then visited Pascoe Vale Oak Park Sports and Aquatic Centre between 4pm and 7.30pm on February 10.

They also went to Elite Swimming in Pascoe Vale between 5pm and 6pm on February 8.

‘If you have been to these sites you will need to isolate, to get tested and to stay isolated for 14 days,’ Mr Foley said.

‘That goes above and beyond the general circuit maker that we are currently in,’ he said.

The health minister refused to comment further on the original Holiday Inn case after a man was accused of sparking the Covid-19 outbreak after using a nebuliser.

‘Since I have been the minister for health I have made it crystal clear that I do not comment on individual cases and put people and families through trauma,’ he said.

‘And I will not be starting that today. This family needs to put all of its effort into getting well.’

The new cases come after Greek tennis player Michail Pervolarakis tested positive to Covid-19 after he flew from Melbourne to South Africa.

Pervolarakis had represented his home country at the ATP Cup before he left the city on February 9.

Tennis Australia says he tested negative to Covid-19 the day he left Melbourne.

‘His own medical advice is that it was likely he contracted the virus in Doha or on the plane,’ a spokesperson said.

Pervolarakis took to Instagram on Saturday to say he was ‘completely asymptomatic’.

‘I am completely asymptomatic at the moment and will have to quarantine in an isolation facility in Potchefstroom,’ he said on his Instagram account.

‘I am not a person that complains, but I feel that I need to express my disappointment with the conditions we are in.’

Victoria recorded one new case in hotel quarantine, bringing the total number of active cases in the state to 22.

Mr Weimar added all 12 staff had tested negative at the Brunetti Cafe in Terminal 4 at Melbourne Airport.

The cafe was listed as an exposure site after a Covid-19 positive person visited the venue on February 9.

‘Of the 44 customers, customers we believe visited there during that time, 19 of those are interstate and are being supported by interstate colleagues,’ he said.

‘My thanks to our health teams in other states for the coordinated way in which we continue to work.’

Mr Weimar added viral fragments had also been found in wastewater in Coburg and South Melbourne.

‘We have two detections that we are currently investigating. One is in the Coburg catchments which takes in Coburg, Coburg North, and the other is in the south of Melbourne, that Punt Road, Clarendon Street area, which we are keen to understand more of,’ he said.

‘We do have a couple of exposure sites, a few cafes in that area that are listed on our website, so I would really encourage people who are in Reservoir, Southbank, South Melbourne to be extra vigilant and come forward to be tested if you have any symptoms.’

Victoria has entered its second day of a five-day long lockdown as the state attempts to curb the spread of an outbreak at Melbourne Airport’s Holiday Inn.

Millions have been plunged back into the hardship they thought had been left behind with the lengthy restrictions and economic sacrifices of 2020.

Florists and restaurants hoping to receive bumper trading for Valentine’s Day are gutted at the loss of income they will incur as fresh produce goes unsold.

Mr Foley said it was too early to tell whether the five-day lockdown would have to be extended.

‘What we have today is the first day of a five day quick snap shot to get ahead of this,’ he said.

‘It is too early to say whether we have been successful but the signs that show Victorians are doing the right thing, supporting each other, all of these are positive measures.’

The man accused of being at the centre of a the Hotel Inn outbreak had used a medical device for his asthma called a nebuliser in their hotel room, despite them being banned outside of medi-hotels.

The nebuliser’s use has been attributed to spread of coronavirus at the Holiday Inn.

The man hit back at what he felt was authorities’ criticism of him, claiming he had declared the nebuliser to medical staff at the hotel.

On Saturday however, head of the state’s hotel quarantine authority Emma Cassar denied he told staff about it.

‘I can categorically say that there is no evidence from our audit that he has raised this with our health team,’ she said.

Ms Cassar said the man had been badly treated by the media and she was sorry about his experience.

‘We have never accused him of doing the wrong thing,’ she said.

There are close to 1000 primary close contacts associated with the Holiday Inn cases who are isolating for 14 days and being tested. Their results are expected to start trickling through on Sunday and Monday.

He defended the ‘circuit-breaker’ lockdown saying he could not ignore advice from experts.

‘Nothing should be read into it as having any intention to extend a day beyond when we think they need to be in place. For now, that’s five days,’ he said.

Until 11.59pm on Wednesday, Victorians are only able to leave home to shop for essential items, provide or receive care, exercise and to work or study if they can’t from home.