Why this lockdown in Melbourne is going to hurt


Melbourne‘s COVID-ravished CBD had been enjoying a much needed resurgence before another cruel lockdown cast it back into despair.

Just a week ago the city had sprung back to life, with pubs and restaurants bustling with activity.

It had been a hard slog for CBD businesses to make it this far after enduring three devastating lockdowns over the past year. 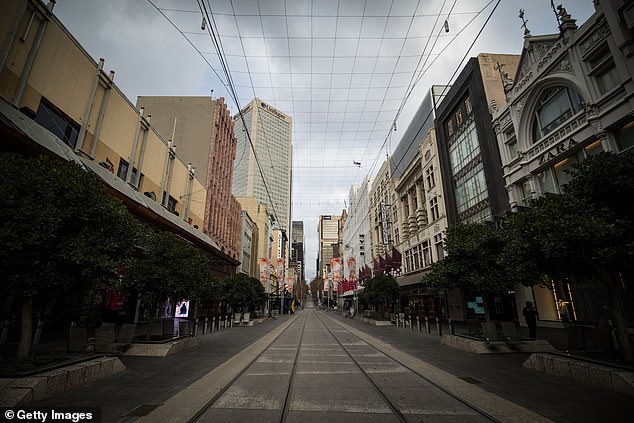 Not a soul to be seen. The city has again been plunged back into the dark ages 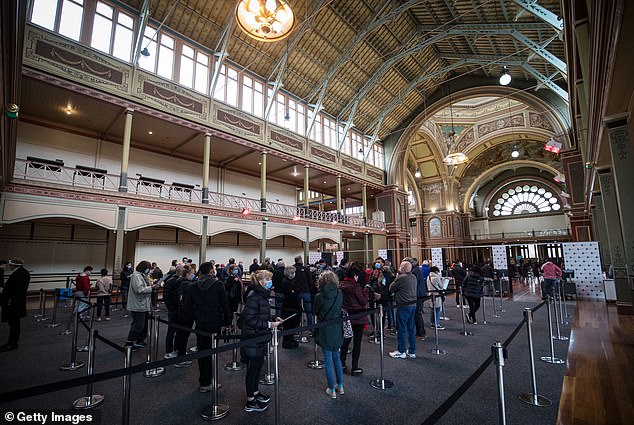 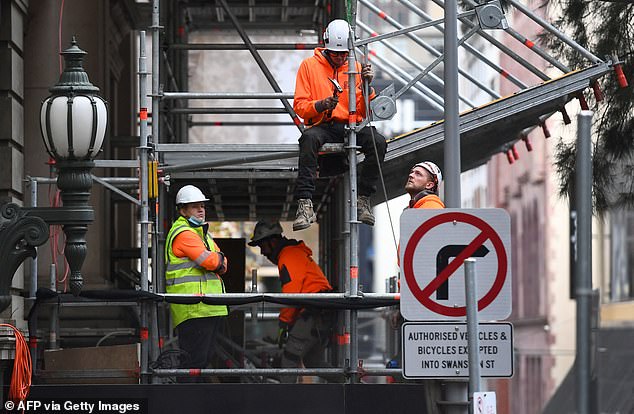 Tradies work on a building in Melbourne. They are among the only people left in the city now

It seemed some type of normality was finally returning to the heart of Melbourne as office workers were ordered back to headquarters.

While still a long way from a pre-COVID Melbourne, the city had become once again a hive of activity.

Cafes only weeks ago that were serving a handful of coffees now had lines out the door, with more workers needed to serve the masses.

It was a plainly obvious revival that had been welcomed by long suffering city business owners.

On Friday, the city had again been plunged back into the dark ages, with businesses again forced to close their doors and wait for better news.

By now Melburnians are familiar with the lockdown routine having just come out of another snap five-day hard lockdown in February.

Back then, resilient Melbourne businesses were forced to grin and bear it.

After enduring months of lockdown last year, the five-day lockdown seemed like a walk in the park.

But the cumulative impact of successive lockdowns cannot be understated.

Since the start of the pandemic, Melburnians have spent 160 days confined to home quarters.

The economic toll has been horrific, not to mention the impact on Melburnians’ mental health. 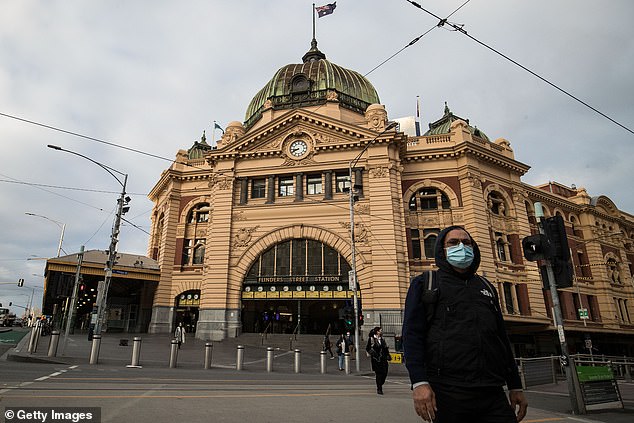 Melbourne is again in the grips of yet another hard lockdown. Flinders Street Station in the heart of the CBD is quiet once more 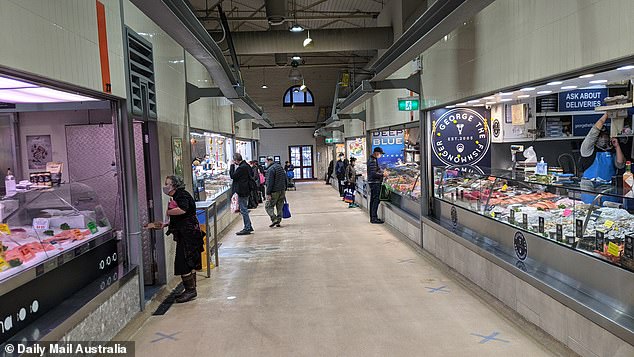 The Queen Victoria Market in Melbourne was jam packed with produce, but only a handful of people were there to buy it 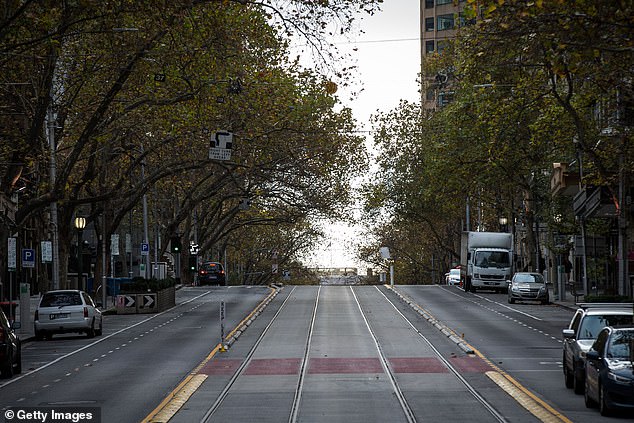 Collins Street in Melbourne’s CBD has again been deserted 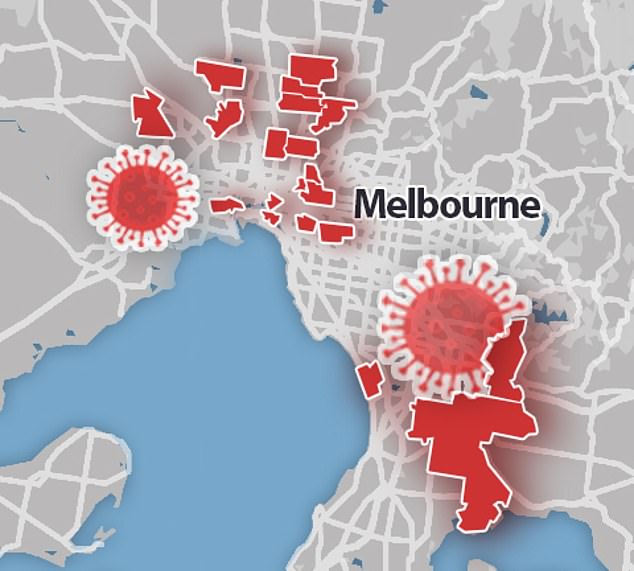 Busy cafes last week today sit idle, with many choosing not to open their doors at all.

What remains of city foot traffic is wearing fluorescent yellow and orange.

Without Melbourne’s construction and transport workers, the CBD would be practically empty.

Melbourne’s Queen Victoria Market at lunch time catered to but a handful of people – mostly constructions workers from a nearby building site.

Miserable shop keepers peered from behind counters at their empty businesses, with many not even bothering to remove the stools from their positions upside down on the dining tables.

After all, people are not actually allowed to dine in and must again stand outside in the cold to grab a quick bite to eat.

Daily Mail Australia spoke to several frustrated business owners who were forced to bin fresh food purchased to cater for the weekend.

One restaurateur, who declined to be named, had just decked out his fridges with an abundance of new stock to cater to a brand new menu.

‘We had functions booked out here. It’s all going to waste now,’ he said.

The popular bar and restaurant had been enjoying a much needed lift in patronage after months of despair.

‘This will put everything back again for months. People return to isolation and it changes the way they interact,’ he said.

‘People were just starting to get back into the groove and this is really going to hurt us.’ 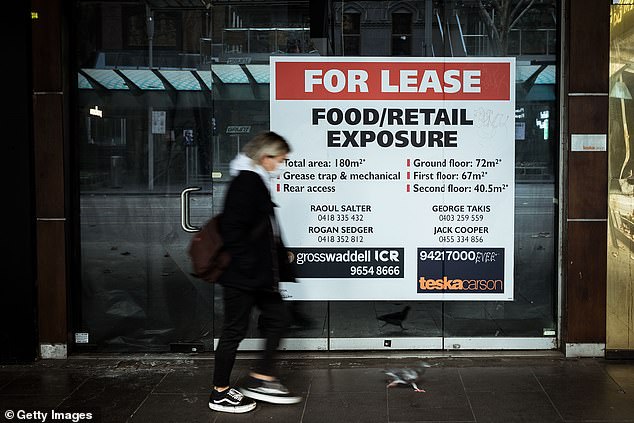 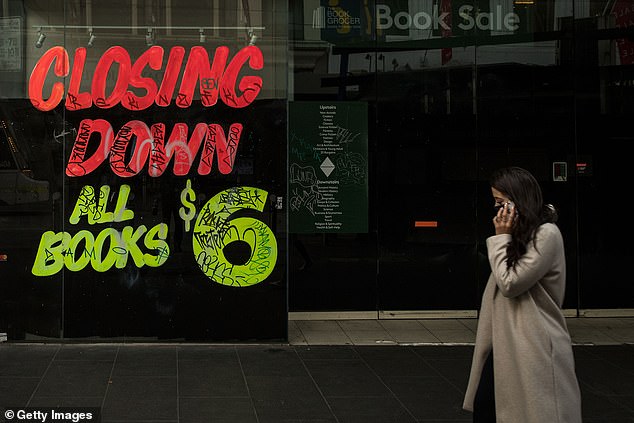 For thousands of casual workers across the city, the fear remains that the snap seven day lockdown will be drawn out.

Other experts, such as the Grattan Institute, think it will probably cost closer to $900 million.

Analysis from the Commonwealth Bank this morning warned of further lockdowns until widespread COVID vaccination is achieved.

‘The lockdown is longer and more widespread than the one imposed in mid‑February. People’s mobility is expected to decline again from its pandemic high,’ analysts said.

The frustration Melburnians are feeling is palpable considering the broken promises and repeated failures by its state government.

It is mind boggling that no uniform QR code tracing system had been implemented at business fronts until now.

Even now, with five new cases of community outbreak, Victorian authorities have been caught out.

On Friday, the state’s testing commander Jeroen Weimar admitted a number of places visited by those infected had not been captured by its fractured system.

A compliance check in April revealed a whopping 37 per cent of businesses had been non-compliant.

On Thursday, as Melburnians were about to enter lockdown, Daily Mail Australia again entered several bars and restaurants without being asked to check in. 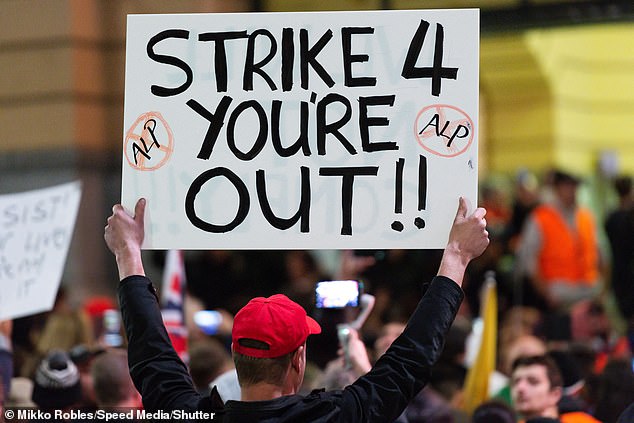 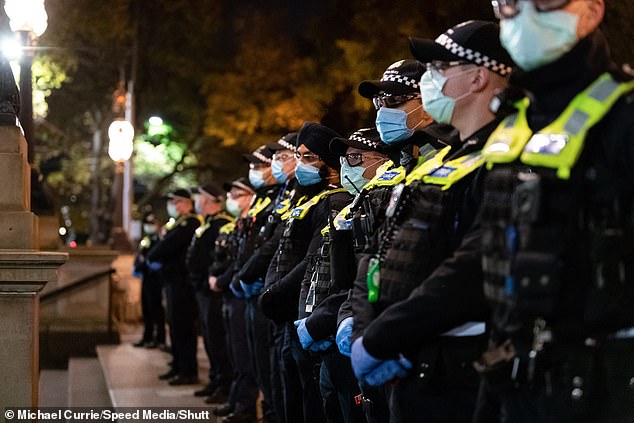 Prime Minister Scott Morrison has been imploring Victoria to get its act together since September.

He had called on Victoria to mimic the ‘gold standard’ of NSW which had enabled that state to suppress six outbreaks that had been linked to Victoria.

‘The most important thing is ensuring that we build an integrated tracing capability right across the country that enables a country to remain open despite the threat of outbreaks,’ he said at the time.

Victoria’s contact tracing team were slammed this week by the Australian Medical Association for letting the state down after listing the wrong supermarket as an exposure site.

The Victorian government was forced to admit its contact tracing team ‘fell down’ again after it took almost two weeks to realise they had identified the wrong Woolworths store as a COVID hotspot.

It was an astonishing blunder simply deflected by Chief Medical Officer Professor Brett Sutton because they found no evidence anyone else had been infected over the mistake.

Scores of Victorians have responded angrily to the latest lockdown, flocking to Melbourne’s CBD to call for an end to what they deem unlawful restrictions.

Angry protesters carried placards and shouted as they marched through the city.

Lockdown measures came into force overnight meaning Victorians can only leave their home for five reasons, including to seek medical care or purchase essential items. 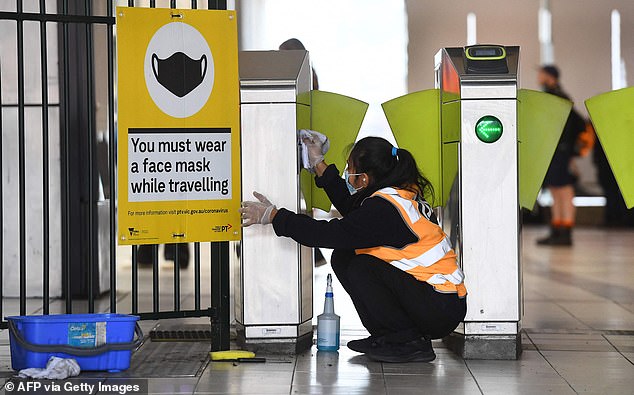 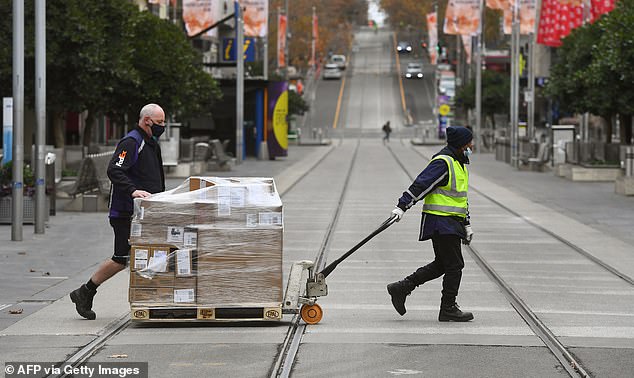 The flouro brigade: Most of the people left in Melbourne’s CBD are wearing flouro vests 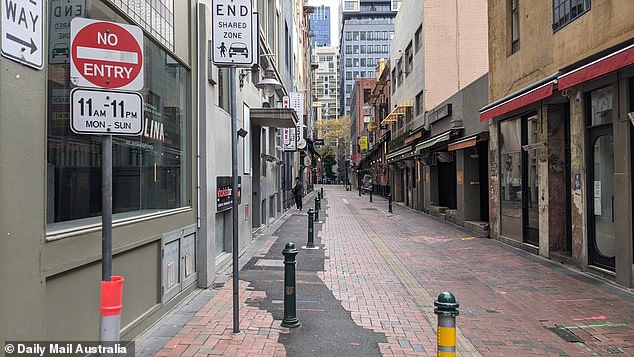 Hardware Lane had been enjoying a surge in activity in recent weeks, but again has been reduced to a stand still

The ugly scenes had become increasingly common towards the end of last year’s second deadly COVID-19 outbreak, which saw Melburnians locked down for what at the time was a record length.

Hundreds of people had died during Victoria’s second deadly COVID outbreak, which escaped from hotel quarantine.

Victorian Premier Daniel Andrews had initially blamed Victorian families for failing to adhere to the rules for the outbreak before apologising for his government’s monumental failure.

On Thursday, Acting Premier James Merlino again put the boot into Victorians for failing to get vaccinated quickly enough.

Never mind residents trying to book a shot over the phone struggle to get past an automated message.

The vaccine hotline crashed on Friday morning as authorities scrambled to adequately resource it.

With more protests planned for the weekend, Mr Merlino said there would be police enforcing lockdown restrictions.

Melburnians can also expect to see soldiers back on the streets, with the government requesting assistance from 150 Australian Defence Force personnel to help enforce the lockdown.

After four lockdowns, Victorians on the brink of disaster yet again are demanding not only answers, but an end to the blunders.

This  one is going to hurt.