Brisbane is often eclipsed by Sydney and Melbourne in the eyes of Australians in terms of population, arts and culture, but Queensland‘s capital is giving its southern rivals a run for their money until Sunday with a city-wide arts festival.

Curiocity Brisbane is a 17-day festival celebrating science, art, and technology which aims to transform the Sunshine State capital into an cultural hotspot for locals and visitors.

The festival is designed to bring science and tech out of the lab – allowing visitors to experience interactive installations with the main event being the World Science Festival Brisbane which runs from March 12 to 28. 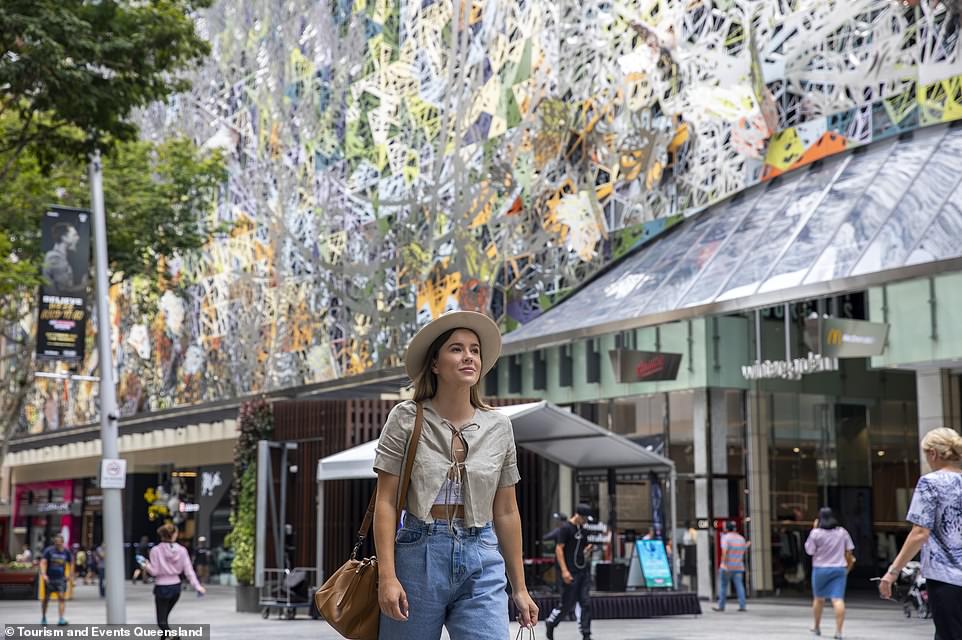 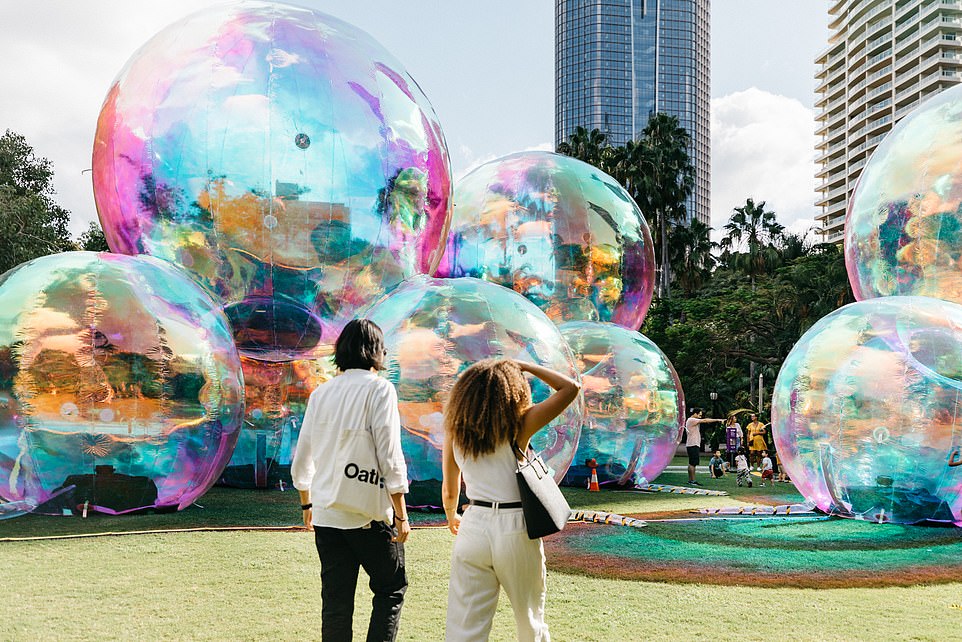 ‘It’s designed to capture imaginations as our great city is transformed across four precincts at the City Botanic Gardens, South Bank, South Brisbane’s Cultural Precinct and the Brisbane CBD,’ Minister for Tourism and Innovation and Minister for Sport Stirling Hinchliffe said of the event.

Almost half of the 60 impressive Curiocity installations are world premieres, while 14 have also been made with the help of local artists.

The event is expected to contribute $14million to the Queensland economy and draw about 325,000 visitors, many from interstate as travel bans ease.

And its not just interactive art drawing the crowds, with the city’s many bars, restaurants and music venues also getting in on the action.

While the events are wildly different, they have some similarities – with the main aim of both the Sydney and Brisbane events to bring vibrancy to community spaces and laneways. 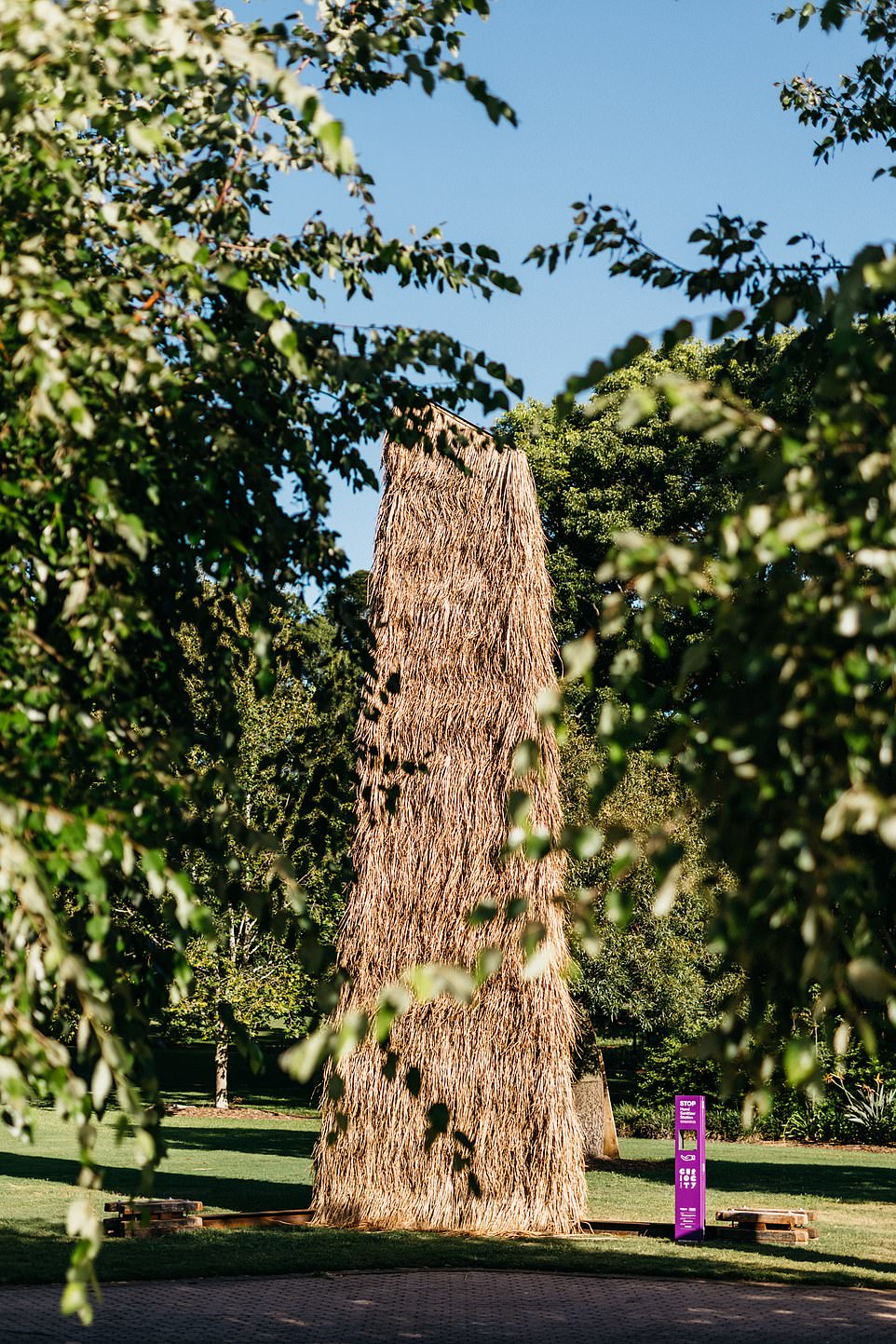 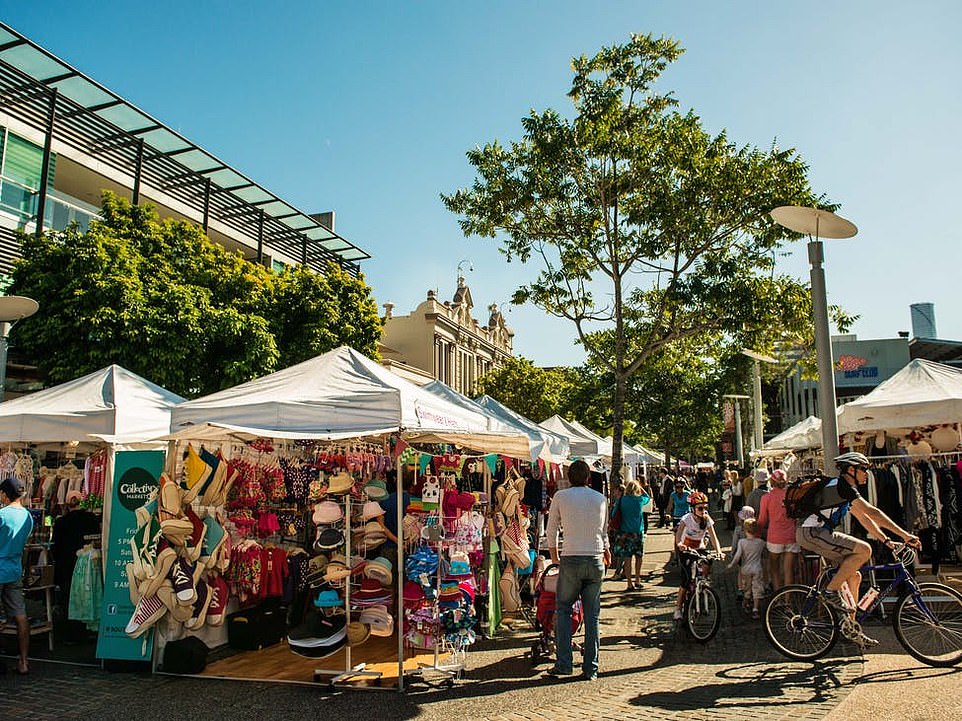 The festival is expected to draw 325,000 visitors and contribute $14million to the Queensland economy

Further south Melbourne, Australia’s traditional arts capital, has been dealing with an extended battle with Covid-19 including a 112-day lockdown to add to sky-high house prices and fluctuating temperatures.

Brisbane has meanwhile quietly grown into a thriving metropolis of bustling bars, restaurants, dance floors and arts events that puts the rest of the nation to shame.

Walking around SouthBank, the CBD, the Cultural Precinct and the City Botanic Gardens it’s difficult to believe Covid is still an issue.

Over the past week and a half, tens of thousands have been flocking to Curiocity, which includes a functional giant guitar at SouthBank and a series of luminescent domes erupting from the grass at the Botanic Gardens.

Here, Daily Mail Australia explores Brisbane’s thriving arts and nightlife scene to make sure you make the most of the river city in the final days of Curiocity. 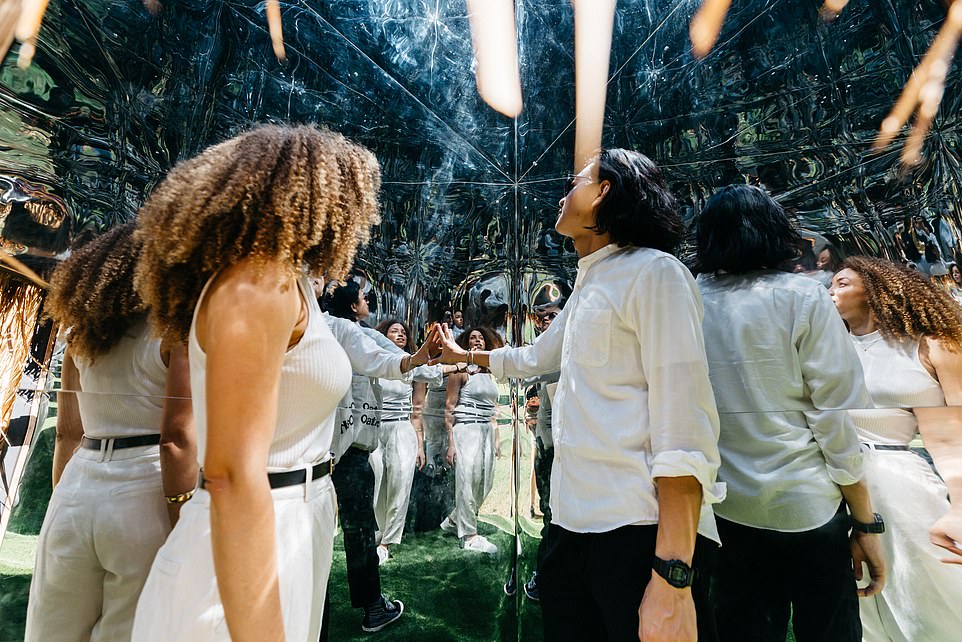 Over the past week and a half, tens of thousands have been flocking to Curiocity, which includes a functional giant guitar at SouthBank

The Curiocities are spread across four precincts on a 6.5km walking trail throughout the City Botanic Gardens, South Bank, South Brisbane’s Cultural Precinct and the Brisbane CBD.

• The Magic of Mycelium

• What if we worked together? (Leichhardt State School)

Curiocity Brisbane is a 17-day celebration of science, art and technology.

Visitors of all ages are invited to interact with physical and digital installations, including 28 never-before-seen pieces created by artists and makers from across the state and around the globe.

Now in its second year, the 2021 program reflects Queensland’s place as a global hub for science, technology, innovation and the arts.

Minister for Tourism and Innovation and Minister for Sport Stirling Hinchliffe said the event is ‘one of a kind’.

‘Almost half are world and national premieres, making Brisbane the first place you can experience them,’ he said.

‘Queenslanders have done a magnificent job with Covid-19 which means we can host events like Curiocity Brisbane that support jobs for Queensland’s economic recovery.’

Highlights include Maiwar AR by Bilbie Labs – an immersive Augmented Reality work, allowing users to scan a QR code and look at parts of Brisbane as it would have appeared for indigenous Australians before British colonization.

Evanescent is also popular with children, and is an installation by Chimera Atelier and Pineapple Design Studios, and involved multiple large bubble-like domes erupting from the grass at the Botanic Gardens.

SouthBank and the CBD are swarming with trendy restaurants and bars that are so popular bookings are essential.

The Spaghetti House Trattoria is positioned on the corner of Lt Stanley Street and Grey Street, right in the middle of SouthBank, with chairs spilling out onto the street.

Customers can watch the hustle and bustle while enjoying a rustic Italian meal with a range of wines, cocktails and desserts.

Right in the middle of the city is Boom Boom Room – is a thriving underground hotspot with a diverse menu inspired by the street food of Japan.

With a range of authentic sashimi and yakitori plates, as well as bold dishes curated by Executive Chef Jake Nicolson and Head Chef Zac Sykes, Boom Boom Izakaya is surely one to experience.

The drinks menu has a variety of unique cocktails mixed by Brisbane’s best bartenders, wines sourced by award winning sommeliers and the finest beer, whiskey and sake imported from Japan.

The Queensland Gallery of Modern Art is located in SouthBank where patrons can enjoy new exhibition The Motorcycle: Design, Art, Desire.

Until April 26, visitors can see an impressive display of 100 motorbikes throughout history.

Highlights include a steam- powered 1871 Perreaux, the oldest known motorcycle in the world, the earliest Australian-designed and built machines from 1906, and a range of modern and electric bikes that give viewers a glimpse into the future of transport.

While dinosaurs may have ruled the land, giant marine reptiles hunted the depths of the sea.

The Sea Monsters exhibition brings together real fossils from millions of years ago and gigantic replicas including a 13-metre long Elasmosaur and 9-metre long Prognathodon, alongside hands-on interactives, including a 180-degree immersive video.

Featuring research from Queensland Museum scientists that focuses on these ancient reptiles and spans the globe including Queensland, Norway, and beyond.

The writer was a guest of Curiocity Brisbane. 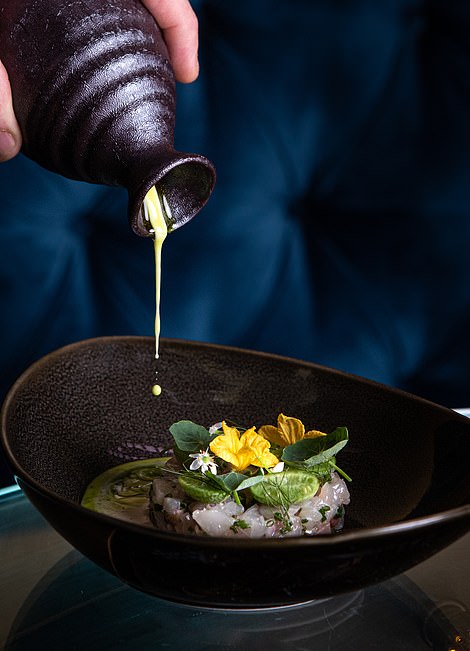 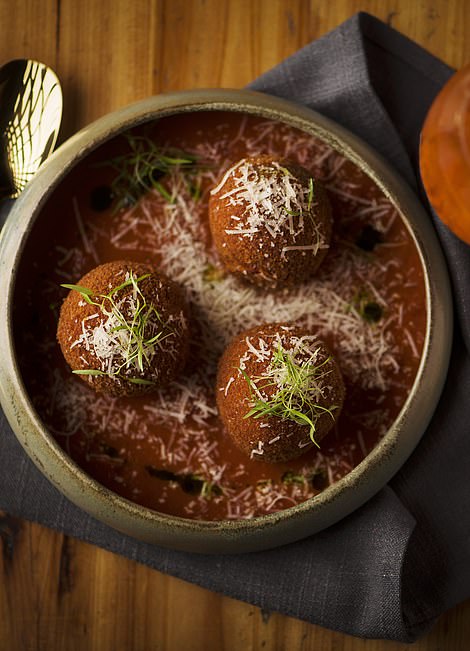 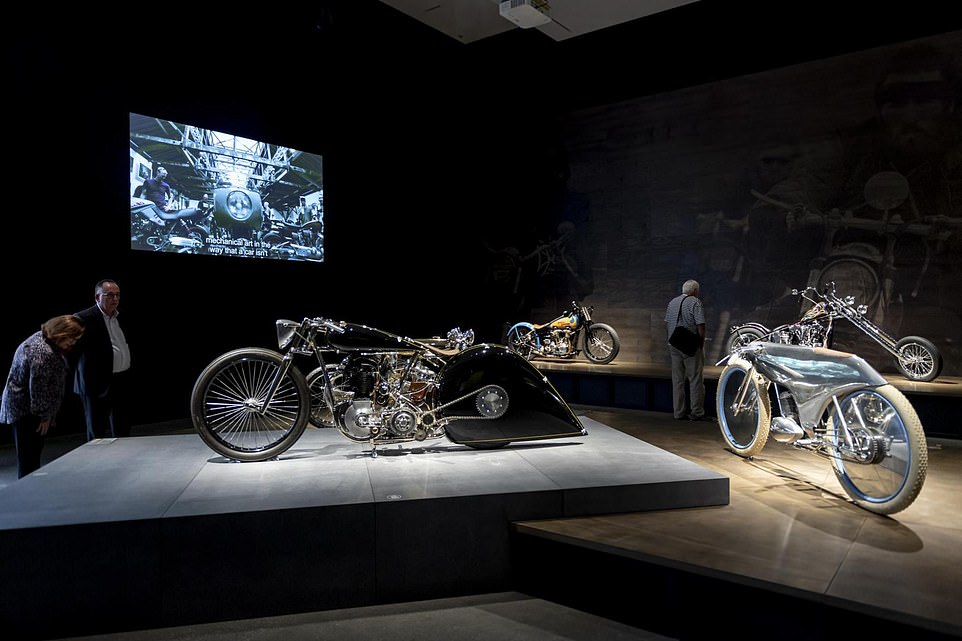 Visitors of all ages are invited to interact with physical and digital installations, including 28 never-before-seen pieces created by artists and makers from across the state and around the globe