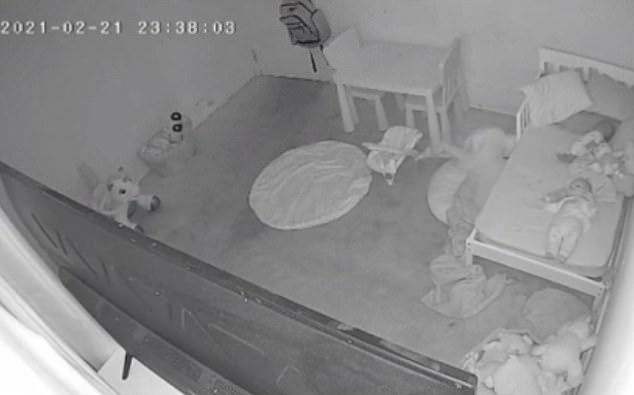 Never look under the bed! Father shares spooky baby monitor footage of toddler ‘being pulled under her bed’ while screaming ‘mummy’

This is the spooky moment a father claims his daughter was ‘pulled under the bed’ by ‘something’ paranormal.

Father-of-six Josh Dean, believed to be from the US, later took to TikTok to share the eerie footage with others alongside the caption: ‘My daughter being pulled under the bed… wife thinks she crawled but she was clearly pulled by something!!’

During the clip, which was captured at 11.37pm on February 21, the young girl gets off her bed and walks over to where her pillow is.

The toddler begins to crawl underneath the bed but suddenly becomes panicked and cries out ‘mummy’ several times.

She continues to call out for her mother as her legs disappear under the bed.

The spooky footage, which has since received more than 900,000 likes on TikTok, was posted alongside the hashtags #paranormal, #needanswers and #wtf.

Mr Dean later shared another clip on the social media platform where he reassured viewers his daughter ‘slept wonderfully’ despite the spooky event.

He said: ‘Just to give you an update, Emma stayed in the bed with us all night. She slept wonderfully. Didn’t have any issues.

‘What I haven’t done yet is go back to the camera but I highly doubt there is going to be any activity because she wasn’t in there.

‘I think eliminating her out of the room is going to slow down the activity a little bit but we will keep in touch and we will keep a close eye on her to make sure she’s alright.’

Some social media users appeared horrified with the scenes, with one asking Mr Dean to ‘cleanse the house’

One horrified viewer wrote: ‘There’s no way she was scared and crying mommy and just willingly kept crawling under there.’

While another added: ‘Nah dude I’m going to need to go to church.’

Another person said: ‘Cleanse that house. If you need tips let me know.’

However other viewers were sceptical of the scenes, with some suggesting the child had crawled under the bed to get a toy and then become upset when she was unable to make her way out.

One person wrote: ‘The kid obviously climbed under there looking for a toy. And then cried because they couldn’t figure out how to get out…. common sense.’

And anther commented: ‘She started crying because she went there and got confused so she couldn’t get out. That’s common sense people.’

Egypt .. Sending the papers of the perpetrator of the strangest murders in Egypt to the Mufti twice in preparation for his execution