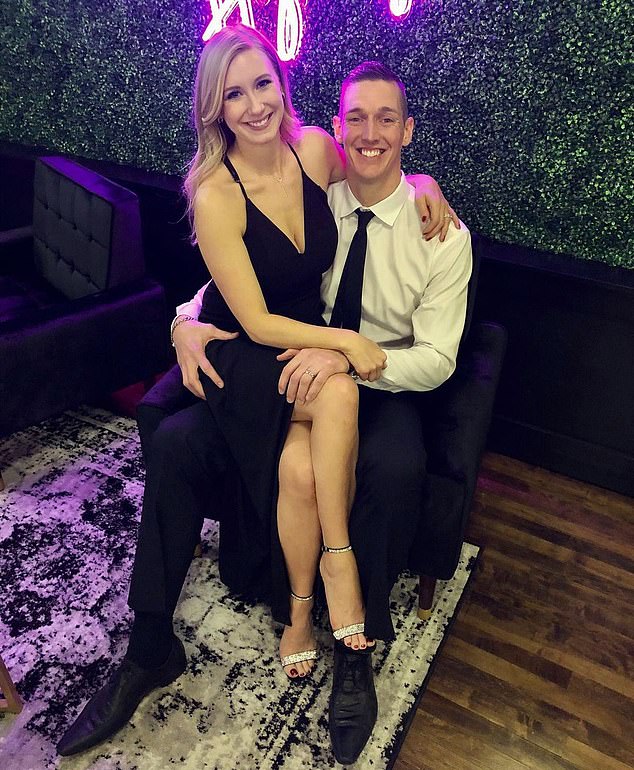 Shae McNamara, an American who spent three seasons with Collingwood, said he had to speak up about 34-year-old Lumumba’s treatment and that the ‘total silence from all of the players who know it went on is disappointing’.

The Magpies have been rocked by the leaked release of the Do Better report, which detailed a culture of systemic racism at the club.

Lamumba, of Congolese and Brazilian heritage, claims about his treatment with the club were first widely revealed in a 2017 SBS documentary titled ‘Fair Game’

The media personality, who has held the position since 1998, fought back tears as he made the announcement at a press conference on Tuesday

Lumumba, a star in Collingwood’s 2010 premiership season, chose not to participate in the club-commissioned review but the report’s authors said there needed to be a serious investigation into his claims.

The report was sparked by Lumumba’s claims about his treatment while at the club revealed in a 2017 SBS documentary titled ‘Fair Game’.

Since then he has been vocal on social media about his alleged treatment at the club – claiming that he was nicknamed ‘Chimp’ – and has demanded an apology.

Melbourne coach Paul Roos has previously said he was ‘shocked’ by Lumumba’s account of his treatment at Collingwood after he shifted to Melbourne team in 2014.

‘I have bitten my tongue for far too long and I can no longer stay silent in what has really bothered me,’ McNamara tweeted.

‘You need to honour the effects of trauma – he felt racism his entire life, in the club, against opponents and through media/social media – everyone has their breaking points.

‘This isn’t about destroying the club – this is about making sure this is the last time anyone at CFC experiences what he did.’

McNamara, who was at Collingwood from 2010 to 2012, claimed the silence of Buckley, Pendlebury, McGuire, Maxwell and Ball – a former AFL Players Association president – about Lumumba was disappointing.

‘Scott Pendlebury, this is your moment to lead, brother,’ McNamara tweeted.

‘The last time I saw you, I gave you two leadership books.

Eddie McGuire earlier this month stood down as president of the Collingwood Football Club following the release of the ‘Do Better’ report.

The media personality, who has held the position since 1998, fought back tears as he made the announcement at a press conference on Tuesday.

McGuire’s decision comes less than a week after the release of a report that revealed there was a history of ‘systemic racism’ within the club.

The controversy-plagued president was slammed for calling the release of the report ‘an historic and proud day for the Collingwood Football Club’.

Lumumba has conducted numerous interviews and has been regularly posting on social media since the report’s release, saying he feels vindicated by the findings of the investigation.

He first raised the alarm on concerns about racism at Collingwood in 2013.

Lumumba claims he experienced a culture of racism, which included being nicknamed ‘chimp’ during his 10 seasons at the club.

Watch .. Was Ronaldo denied a “deserved” penalty while he was “fought” against Porto?