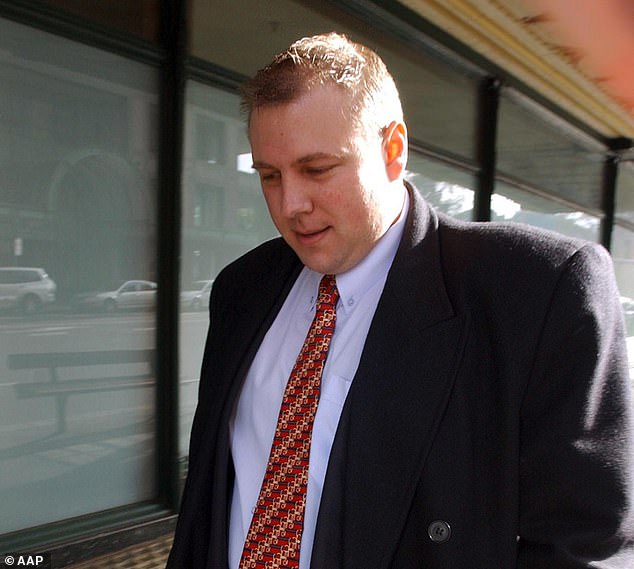 A former Liberal Party staffer and councillor has been jailed after brainwashing a teenage girl into becoming his sex slave.

John Kenny, 50, was stood down from his two-year tenure as a Randwick councillor in 2006 after he was arrested for having sex with a 15-year-old girl he met on the internet.

Police had uncovered evidence of the relationship and he was jailed over the charges in 2009, spending several months behind bars.

But the prison stint did little to deter Kenny, who worked for Wentworth Federal Liberal Peter King in 2003, from pursuing underage girls.

John Kenny, 50, (pictured leaving court in 2004) was jailed for eight years this month over sex offences relating to a 13-year-old girl

Kenny faced the NSW District Court this month on fresh child sex abuse charges in relation to a 13-year-old girl he started messaging on anonymous app, Whisper, in 2019, the Daily Telegraph reports.

He was charged with failing to comply with his Child Protection Registry, which required him to report any contact with a child, and for child pornography, after images of the girl in various sexual states were found on his phone.

He was sentenced to eight years behind bars with a non-parole period of five years and seven months.

He would tell her: ‘This is all for you baby’, with the girl soon sending explicit messages in return, believing the pair were in a relationship.

Just three months later, Kenny convinced the girl to register herself as his ‘slave’ on a fetish website, later asking for a video of her reciting a ‘slave oath’.

His messages grew more explicit towards the end of the year, with Kenny sending her dog tags bearing her slave number for Christmas, labelled ‘Daddy loves his princess’.

Prosecutors said Kenny ‘brainwashed’ the girl by ‘normalising sexual depravity’ and argued he had intentions of meeting her.

Kenny was arrested in February 2020 after police discovered he had failed to declare he had spent time in the presence of a child, in breach of his release conditions.

He will be eligible for parole in September 2025.

Iranian diplomat: The talks of the head of the “International Atomic Energy” in Tehran were fruitful