How life is getting back to normal for Israel’s citizens: Nearly 3 million fully inoculated 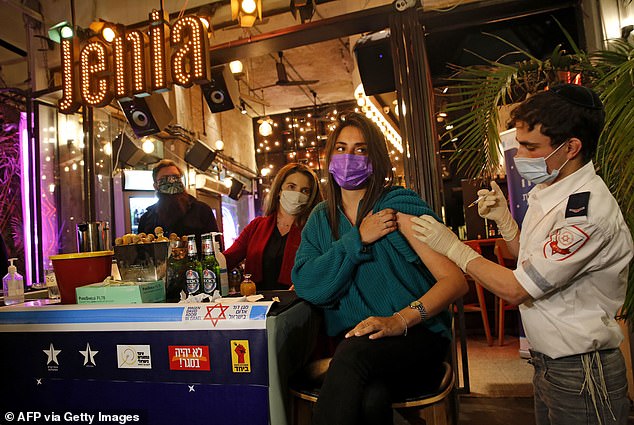 Israel is banking on vaccine passports to re-open its economy with gyms, hotels, restaurants and swimming pools , bars and restaurants open to those with a ‘green pass’ who have had two doses of a jab.

More than a third of Israel’s 8.6 million population has been fully vaccinated in the world’s quickest immunisation programme against Covid-19, and over three million people are eligible for the pass on account of some having already had the virus.

Israeli PM Benjamin Netanyahu is hoping that the vaccine success and the end of Israel’s third lockdown will propel him to victory in March 23 elections.

Israel is banking on vaccine passports to re-open its economy with gyms, hotels, restaurants and swimming pools and restaurants open to those with a ‘green pass’, that indicates who has had two doses of a jab. Pictured: A health worker administers the COVID-19 vaccine to an Israeli at a bar in the coastal city of Tel Aviv

The scheme is being closely watched abroad, with Boris Johnson saying on Monday that the UK was looking at the idea of ‘Covid-status certification’ while adding that there were ‘many concerns surrounding exclusion, discrimination and privacy’.

Israel, which has one of the world’s most sophisticated medical data systems, secured a substantial stock of the Pfizer/BioNTech vaccine by paying above market price and by striking a data-sharing deal with the drug giant.

As of Sunday, nearly 3.2million Israelis were eligible for the green pass, according to the health ministry.

That includes 2.5million people who had their second shot more than a week ago, as well as nearly 700,000 people who have recovered from Covid-19.

Shopping malls and stores with street access re-opened to the general public on Sunday, with certain limitations on crowd size.

But gyms, swimming pools, hotels and some cultural facilities are re-opening only to those who have been fully vaccinated and obtained the so-called green pass.

Lifting weights at a gym in Petah Tikva near Tel Aviv late Saturday, Netanyahu insisted Israel was moving ahead ‘with caution’, while imploring ‘everyone to get vaccinated’.

Standing at the entrance of a posh Tel Aviv gym, 90-year-old Ora Davidovicz said she ‘couldn’t wait’ to go swimming.

‘It’s been almost a year since I went to the pool,’ she said. ‘I’ve been counting the days. All I have to do is put on my swim suit,’ she said, before heading in.

Tom John, a muscular 33-year-old, told AFP he’d been training at home for months but felt safe being back at the gym with the protection systems in place.

‘Everyone here has a green badge,’ he said, surveying the gym.

At the family owned Katalina shoe store in central Tel Aviv, Mordechai Nazarian said his business had been closed for eight of the last 12 months, with ‘little openings here and there’ as Israel lifted restrictions between lockdowns.

‘We hope this one is the right one,’ he told AFP.

Israel has given more does people per-100 people than any other country in the world. As of February 23, 88.77 people out of 100 have had at least one dose.

By comparison, 27.34 people per 100 have been given at least one dose in the UK, which is still the third highest rate in the world.

Pictured: A visitor presents a coronavirus vaccination certificate at the entrance to the Khan Theatre in Jerusalem, Israel, 23 February 2021

More than a third of Israel’s population has been fully vaccinated in the world’s quickest immunisation programme against Covid-19, meaning nearly three million people are eligible for the pass. Pictured: A graph showing Covid vaccine doses per 100 people in various countries, with Israel vaccinating well over over 80 people per 100

Describing himself as a vaccine supporter, he also voiced caution about compelling people to get the jab.

‘We cannot force those who don’t want it to do it,’ he said.

Despite the successful vaccination Israel’s government has approved a night-time curfew from Thursday until Sunday to prevent the spread of the coronavirus over the Purim holiday.

The Prime Minister’s Office and Health Ministry said a curfew from 8:30 p.m. until 5 a.m. would be in force starting Purim eve.

The holiday lockdown prohibits any large gatherings of more than 10 people indoors at concerts, parades or parties typical of the holiday’s observances.

Israel reopened its economy last week after a nearly two-month lockdown, the country’s third since the start of the pandemic. But recent days have seen a slight uptick in new infections.

It has one of the highest immunisation rates per capita, with over 4.5 million of its citizens having received at least one dose of the coronavirus vaccine.