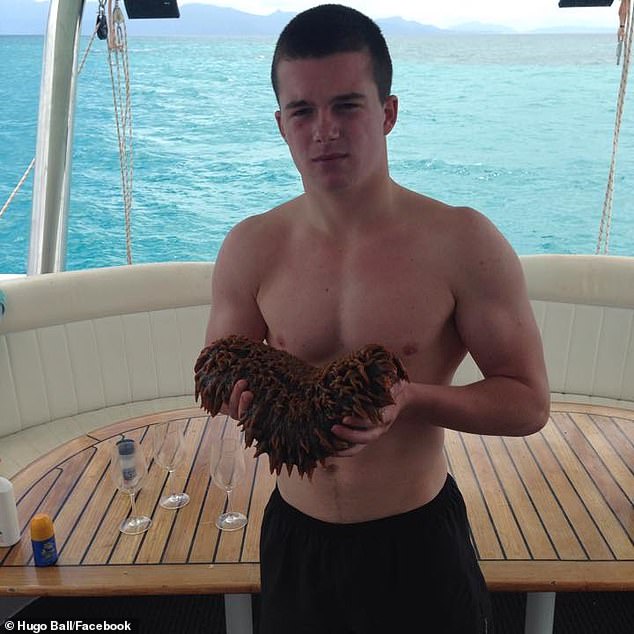 An elite private school graduate who was allegedly stabbed by his own mother was suffering drug withdrawals when he went on a rampage at his father’s house two days after Christmas.

Hugo Ball, 23, pleaded guilty to malicious damage at a Sydney court this week after he turned up to his father’s Paddington terrace and destroyed part of his plantation shutters late last year.

Court documents said the attack unfolded after the Scots graduate’s dad, the former CEO Ian Ball, rang Hugo’s doctor on Boxing Day to report that his son had been drinking.

Hugo wasn’t allowed to drink when taking diazepam medication, better known as Valium. When Hugo went to the doctor the next day for a prescription, he was refused the drug.

Ball had been living at his father Ian’s $5.5 million terrace, which actress Toni Colette reportedly once bid on, when the shutters  were damaged. He turned up at the home that morning hoping to find leftover Valium from a previous prescription

The troubled young man is seen above with his his British-born father, corporate high flyer and former Cardno CEO Ian Ball

Wrongly under the impression his father had leftover medication at his house, Hugo then turned up out the front of his dad’s home on the morning of December 27, the documents said.

‘The accused began aggressively banging and shouting at the front door,’ an agreed fact sheet tendered in court said.

‘The accused went up to the shutters … and has damaged several of these which caused them to snap off and has rendered them unfit for purpose.’

As part of his plea, police withdraw initial claims of a more extensive rampage that officers had made in court documents late last year.

Those unproven claims included that Ball had allegedly turned the hose on and sprayed through the letter box of his father’s front door.

It’s not suggested this claim was true.

Ian Ball, above, previously told Downing Centre Local Court that his relationship with his son was ‘generally, good’

Ball’s mother Samantha (top left) is accused of stabbing her son with a 12 inch kitchen knife in November. Her case remains before the courts

Ball is seen being stretchered out of his mother and stepfather’s $3.1 million Bellevue Hill home in mid-November. He lost two litres of blood, paramedics said

No conviction was recorded against Ball at a hearing this week.

However, a magistrate upheld a two year apprehended violence order putting him on notice not to assault, menace or harass his father.

Ian Ball previously told the court that his relationship with his son was ‘generally, good’.

Hugo was allegedly stabbed by his mother, Samantha Palmer, with a 12 inch knife at her Bellevue Hill home in mid-November.

The alleged attack – the talk of one of Sydney’s most affluent suburbs – resulted in Hugo losing two litres of blood, paramedics said at the time.

Palmer was charged over the alleged stabbing. Her case remains before the courts.