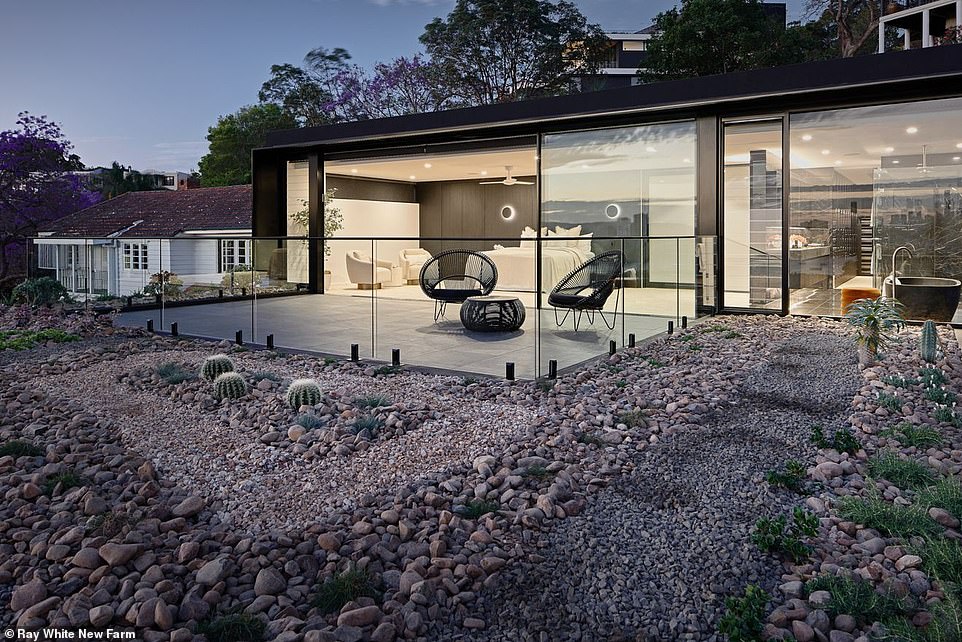 The outside of this unusual yet spectacular home offers a clue of what lays within – a home where the colour scheme appears inverted and everything is black as night.

The stunning home is set upon a hill in Brisbane‘s affluent suburb of Hamilton, and has sweeping views of the river below and the city’s CBD.

But visitors to the home could be forgiven for missing the view all together because the huge home already has enough features to sure to capture their attention.

The home is not short of features, there’s a sauna, spa, pool and bar, as well as eight bathrooms – the one has an amazing black tub

It is five storeys of luxury is 50-shades of black, and well deserving the name ‘Noir’ which alludes to the mysterious yet prestigious qualities of the five storey home.

The huge house has five bedrooms, eight bathrooms and a huge eight-car garage which adds a particular Bond vibe to the home.

The five storey home is in Brisbane’s affluent suburb of Hamilton, six kilometres from the CBD

The kitchen on the main level has a cool room, butler’s panty and serving bench

There is also visitor parking and, if you are feeling tired thinking about all of the sets of stairs in a palatial home like this then don’t, as there is an elevator to each level.

The home appears to have everything, from a recreation level with its own bar, to finger print and face scanner technology built into the security.

There are two kitchen, one small one to service the entertainer’s quarter and a large one with a butler pantry and cool room for the rest of the home.

It will feel like a very bold country club as it has a sauna, spa, swimming pool and cinema room for the owners and guest to enjoy.

The home was described as ‘an architectural masterpiece of design and construction rarely seen in Australia.’

There is a massive 1,050sqm of living space and unobstructed river and city views from every level.

The home was sold by Ray White New Farm in November.