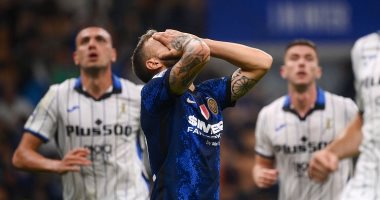 Inter Milan fell into the trap of a 2-2 draw with its guest, Atalanta, in the exciting match that brought the two teams together on Saturday evening, at the Giuseppe Meazza Stadium, in the sixth round of the Italian League for the current season 2021-2022.

Inter Milan’s Federico Dimarco missed a penalty kick in the 86th minute, after he hit the ball at the Atalanta goalpost.

The video technology “VAR” refused to award a third goal for Atalanta, scored by Raphael Toloi in the last minute of the match, because the ball crossed the touch line before the goal was scored.

Inter Milan raised its score to 14 points to occupy third place in the Italian league table, which is led by Milan with 16 points, after its victory earlier in the day against Spezia 2-1, while Atalanta’s balance rose to 11 points in fifth place.