More than 60 roads across Queensland have been closed off due to major flooding caused by a super storm which saw some some regions collect 100mm of water.

The Bureau of Meteorology has forecast wet and wild weather for the east coast of Australia with increased rainfall in Queensland, New South Wales, ACT, Victoria and Tasmania.

The rain has caused major headaches for those trying to travel along 64 different roads in Queensland, which have flooded from a trough which moved up from Northern NSW. 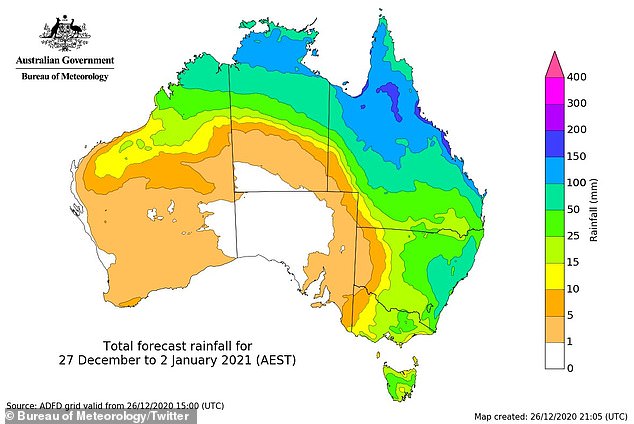 The Bureau of Meteorology has forecast a wet and wild weather for the east coast of Australia with increased rainfall for Queensland, New South Wales, ACT, Victoria and Tasmania 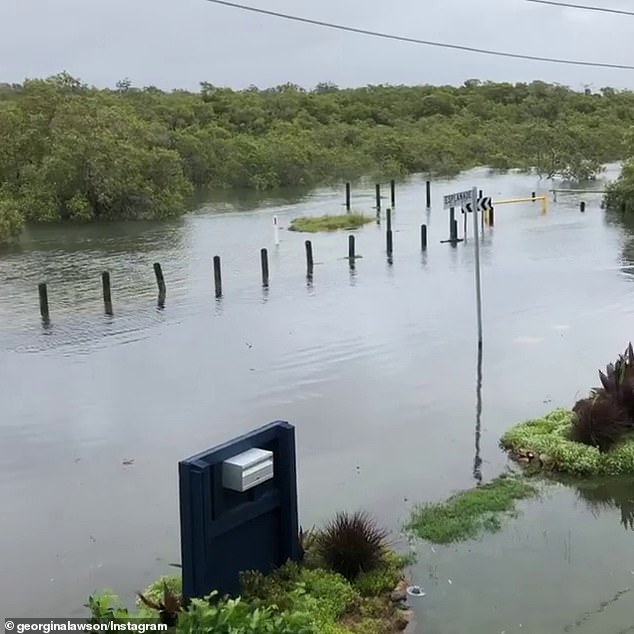 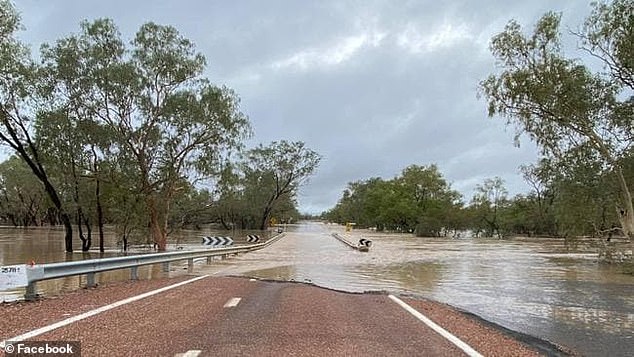 ‘We did have some exceptional rainfall and storms in the evening,’ meteorologist James Thompson said (Pictured: road closed in Queensland from flooding)

A total of 148mm fell in 24 hours up until 9am Wednesday in Waraghai, west of Warwick in southeast Queensland. A day earlier 103mm fell in just one hour.

In Paget near Mackay, a massive 159mm of rain fell in 24 hours while Trafalgar Station was drenched with 136mm.

‘We did have some exceptional rainfall and storms in the evening,’ meteorologist James Thompson said.

‘It was a super rare event, we had some pretty significant warnings out for that one.

‘It was very isolated, places up the road got closer to 40mm and some places even less nearby. The chance of exceeding that rainfall amount is one per cent each year.’

He warned that the trough that came from northern NSW still hasn’t passed and more storms and rain are to be expected on Wednesday.

RACQ spokeswoman Clare Hunter issued an urgent warning to all motorists to be careful and not to drive through floods.

‘While the rainfall is welcome in many parts of the region we need to reiterate the dangers of flooded roads, so again we’re urging drivers to never to drive through flood waters,’ she said.

‘Our RACQ LifeFlight choppers have conducted two dramatic rescues already this week to save the lives of people stranded by flood water and we don’t want to see anyone else putting themselves at risk.’

Throughout the week there is at least a 70 per cent chance of rain in Brisbane ahead of the New Year. 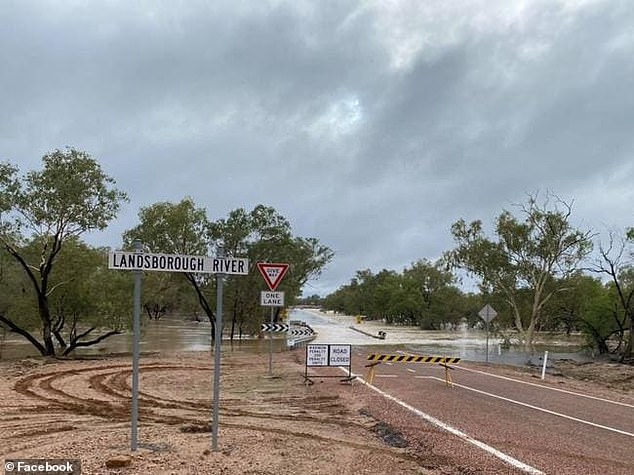 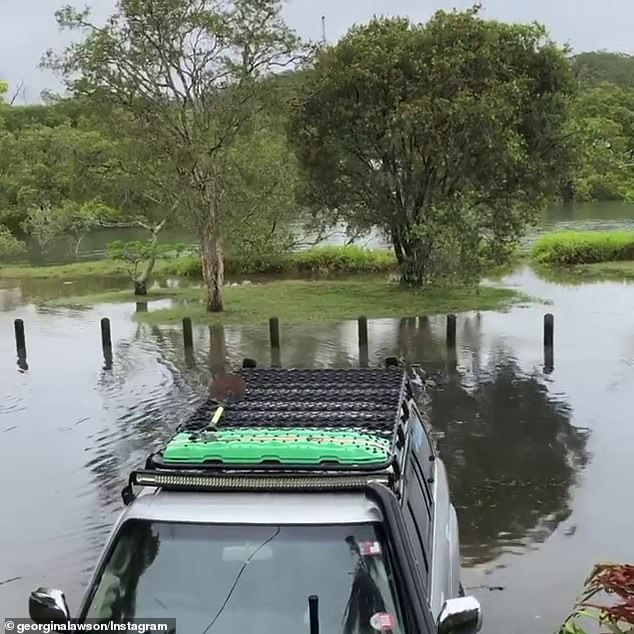 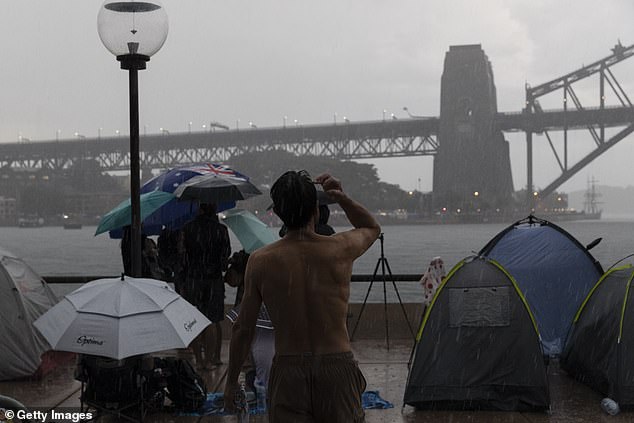 In New South Wales, the state will be welcoming the New Year with temperatures 10 degrees below the December average with rain expected.

The trough is lingering in the state’s north with Terrey Hills and Mona Vale experiencing minor flooding on Tuesday.

Darling Downs, a farming region, welcomed a massive 100mm of rainfall in an hour compared to last year’s dry weather.

Shower and storms are expected to continue throughout the week across the state.

Victoria is also set for a rainy week with the mercury set to reach 28C on New Year’s Day.

Festivities will also be low key in Melbourne – where the New Year’s Eve fireworks have been cancelled.

Tasmania has a tiny trough lingering over it which is bringing some light rain but will have a seemingly dry New Year’s Day.

They will however have a 70 per cent chance of rain on New Year’s Eve. 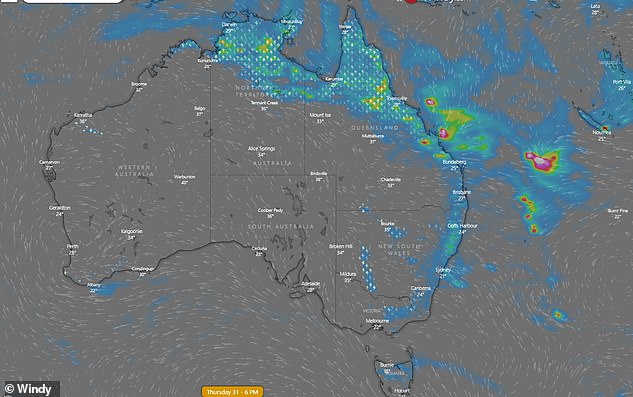 Australia’s Top End and east coast (pictured in blue and green) will cop a soaking on New Year’s Eve. Pictured is the rainfall forecast for 6pm on Thursday night 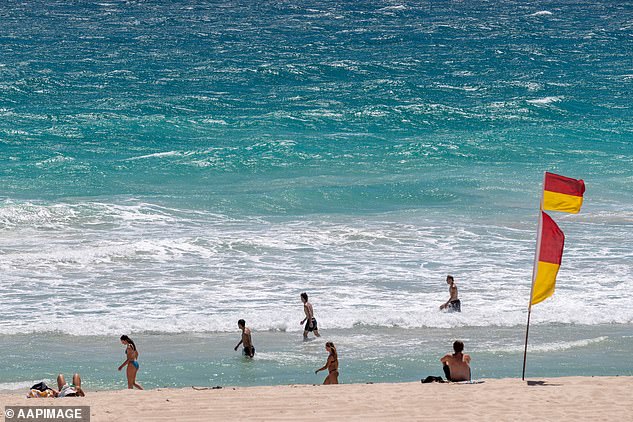 Perth will reach a top of 33C on New Year’s Eve. Pictured are beachgoers at Scarborough Beach in November

The rain along the east coast is due to the current dominance of the La Nina climate pattern, which will deliver a wetter summer.

A La Niña occurs when stronger equatorial winds, blowing east to west, cool the Pacific Ocean in the tropical north of Australia.

Australia had one of the wettest two-year periods on record during the last La Niña between 2010 and 2012.

It’s a different story in Western Australia, South Australia and parts of the Northern Territory.

Perth is set for a scorching end to 2020 with temperatures soaring to a maximum of 35 degrees.

The state just experienced temperatures of 40C over Christmas and the heat is here to stay with many experiencing sleepless nights.

The extreme weather is coming from a surface trough and east/north-easterly winds making its way through the city from the inland. 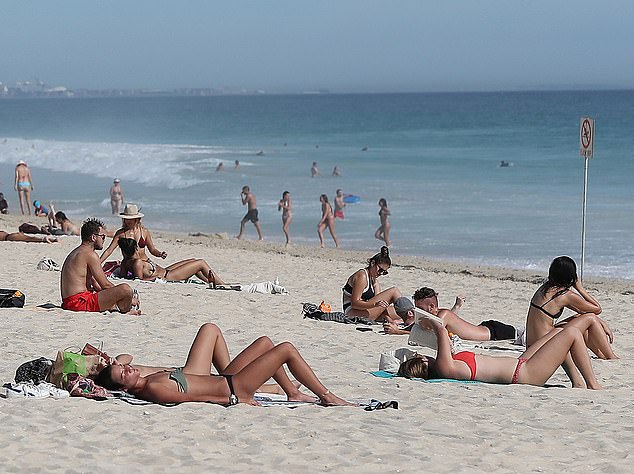 Perth residents will enjoy a drier end to 2020 than the rest of the country, with the mercury reaching 31C and no sign of rain. Pictured: sun seekers lying on Scarborough Beach, Perth 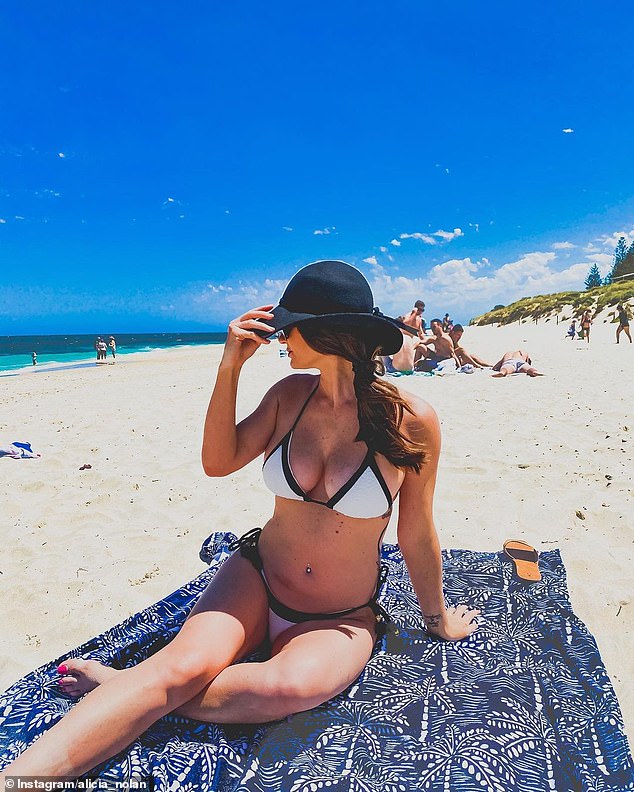 Warmer sea surface temperatures around much of the Australian coastline are likely to persist through the summer months. Pictured: Cottesloe Beach in Perth

Maximum temperatures of 33C have been lingering in South Australia with no rain in sight.

The state will have a stunning 29C on New Year’s Eve before it hits 33C in the New Year.

Southern parts of Darwin have escaped the stormy and wet weather expected for the state’s capital.

Canberra residents will ring in the new year with relatively calm weather. There’s a slight chance of showers, most likely in the afternoon and evening, with tops of 25C before cooling down to a maximum of 21C on Friday.