Bruno Le Maire, the French finance minister, warned that victory for the far-right leader in next year’s poll is a ‘political possibility’ that must be ‘opposed’.

Throwing his weight behind Emmanuel Macron, Le Maire warned of a ‘difficult’ election campaign in a country that is ‘crossed by movements of anger, of doubt which are very deep.’ 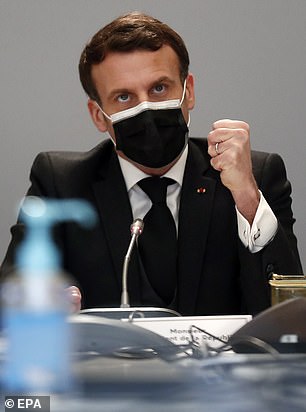 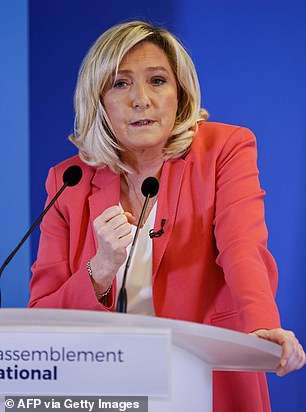 Polls have revealed that Macron (left) is most-likely to face off against Le Pen (right) in next year’s presidential election, with her support at record levels

Speaking to France’s BFM TV on Saturday, he said: ‘The election of Marine Le Pen, as we all know, is a political possibility. It must be fought.

‘Fought with ideas, convictions, results, with men and women who are committed.

‘I hope that in this fight against Marine Le Pen, our ideas will prevail. It is in the field of ideas that we must go, in the field of what we want for France, of the European construction.

‘In 2022, I would like Emmanuel Macron to be a candidate for the election, for presidency of the Republic, and I will be at his side to ensure that he is re-elected.’

Le Marie spoke out after polls taken ahead of the first round of voting, due in April next year, showed support for Le Pen at record levels.

An average of polling data showed support for Le Pen at 26 per cent, narrowly ahead of Macron on 24 per cent.

France’s election system works on an elimination basis – with candidates receiving the lowest number of ballots knocked out of the competition and their votes redistributed among those still left in the race.

Macron is expected to receive a larger share of those votes than Le Pen, meaning he remains ahead in second round voting – but only by a very slim margin. 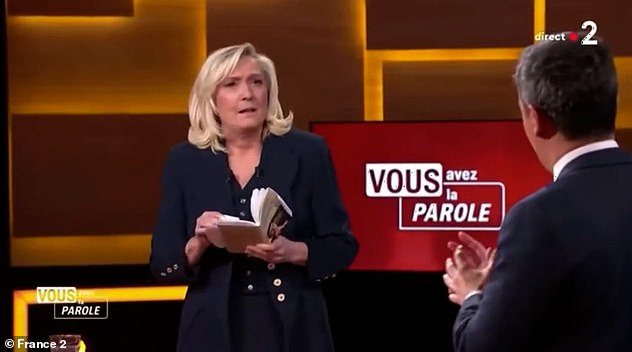 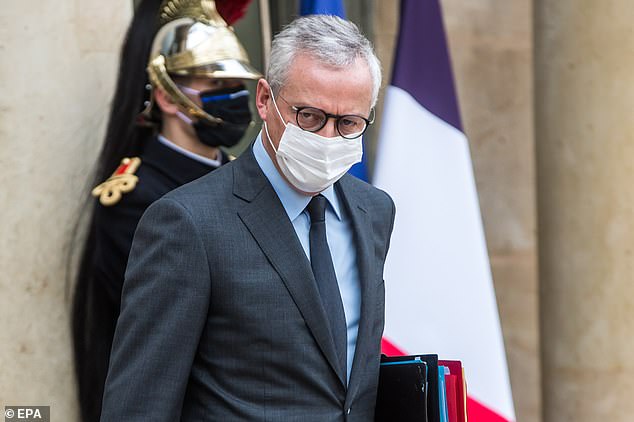 Bruno Le Maire, the French finance minister, has warned that victory for Marine Le Pen in next year’s presidential election is a ‘political possibility’ that must be ‘fought’

An Ipsos poll put Macron at 56 per cent compared to Le Pen’s 44 per cent, while a Harris poll had the gap even narrower – 52 to 48 – which is within the margin of error and puts Le Pen within touching distance of victory.

Sensing pressure from the right, Macron’s party has radically shifted its stance on immigration and Islamism in recent months to adopt a much tougher line.

During a TV debate with Le Pen last week, Interior Minister Gerald Darmanin even went so far as to accuse Le Pen of being ‘soft on Islam’ – a statement which left her visibly stunned.

Darmanin said her efforts to rebrand the National Rally party had led to a watering down of her hardline position that would ‘disappoint’ her base.

Le Pen responded by defending the rights of Muslims to practice and confirmed she ‘does not intend to attack Islam, which is a religion like any other’.

It comes after a series of terror attacks on France in 2020, including the beheading of a teacher at a school near Paris and stabbings at a cathedral in Nice.

Teacher Samuel Paty was killed in October last year after showing cartoons of the Prophet Mohammed to his class, sparking a furious backlash from Muslim parents.

Three weeks later, knifeman Brahim Aioussaoi stabbed three people to death at a cathedral in Nice in a copycat attack.

The attack came amid widespread anger and protests in Islamic countries after Macron defended the Mohammed cartoons. He later called Islam ‘a religion in crisis.’