Milan beat Lazio with a goal in the first half of the Italian League .. Video 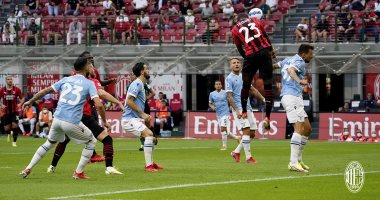 The Italian team Milan succeeded in ending the first half, ahead of its guest Lazio, with a goal free of charge, in the match currently being held between them at the “San Siro” stadium, the stronghold of the Rossoneri, in the third round of the Italian league competition for the current season 2021-2022.

Rafael Liao scored the goal for Milan against Lazio in the 45th minute of the match.

Milan’s Frank Kessie missed a penalty kick awarded by the referee in the last minute of overtime in the first half, hitting the ball over the crossbar.

Milan enters the Lazio match, which is in sixth place in the Italian league table with 6 points, with a goal difference only behind Lazio.

Milan won the first two consecutive matches of the Italian League, for the first time since the 2002-2003 season, 2003-2004, under the leadership of Italian coach Carlo Ancelotti.

Milan is preparing for a strong confrontation against its guest, Lazio, and then Liverpool will meet the Egyptian star Mohamed Salah, next Wednesday evening, at Anfield, in the first round of the Champions League group stage for the current season 2021-2022.