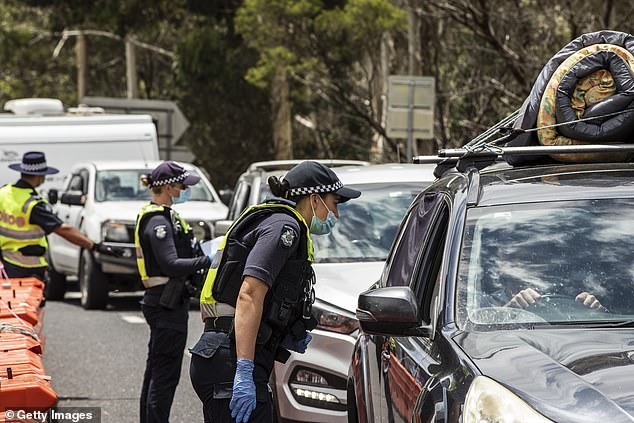 The Northern Territory has shut its border to greater Sydney after declaring the city a Covid hotspot on Thursday and suggesting further restrictions for New South Wales and Victoria are being considered.

Anyone arriving in the NT from Sydney after midnight Thursday will be subject to a fortnight of mandatory quarantine.

Sydney residents wanting a trip to the top end have suffered a setback after the Northern Territory closed its border to the city, requiring visitors to undergo two weeks of quarantine

Coronavirus cases continue to grow in two clusters in Sydney, plus an increasing number of community-transmission diagnoses in Melbourne.

Some other states have already closed their borders to travellers from NSW.

Ms Fyles urged Territorians to reconsider any travel plans they have for the coming weeks.

‘Now is the time to really consider any travel plans so that you don’t end up in mandatory quarantine at a cost of $2,500,’ she said.

Three crew members from cattle export ship the Diamantina continue to be treated for coronavirus in Royal Darwin Hospital, as the vessel’s immediate future remains a matter of discussion.

‘We’re working with the ship’s owners and the unions around that ship, and what processes need to be undertaken before it can exit the Port of Darwin,’ Ms Fyles said.

A skeleton crew remain on board the vessel, with the remainder at the Howard Springs quarantine facility, near Darwin.

‘There is a testing regime that has taken place for the remaining crew members … as well as any port and other workers that may have interacted with that vessel, and I can confirm only the positive tests that I’ve just spoken about – there’s no other positive tests to date.’

Iran’s ambassador to Rome: Soleimani’s killing was ordered by Trump