A New York police officer was taken to hospital in the early hours of Friday after a freed gang member and attempted murder suspect suddenly reversed his car at a traffic stop, dragging the officer with him before going on a wild 12-hour rampage. 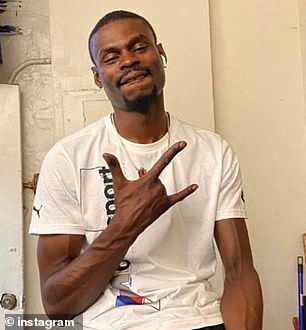 The unnamed officer stopped Takim Newson, 32, at 3:30am in the troubled Brownsville section of Brooklyn.

They were called to reports of a Mercedes-Benz with excessively tinted windows blocking traffic.

The officer tried to pull Newson out of the car, but Newson rapidly reversed, startling the officer and knocking him to the ground before speeding off.

The unidentified officer suffered a back injury and bruising to his knees and elbows, and was taken to NYU Langone Hospital-Brooklyn, The New York Post reported.

Newson was free without bail, awaiting trial for a Valentine’s Day attempted murder in Queens.

He is accused of shooting a 43-year-old man in the groin while attempting to rob him of a cellphone at the PreGame Sports Bar & Lounge in Jamaica.

Newson fled New York City after the shooting, but marshals tracked him down to his mother’s home in North Carolina. 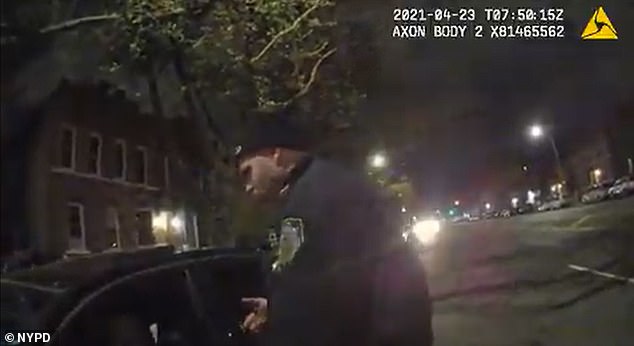 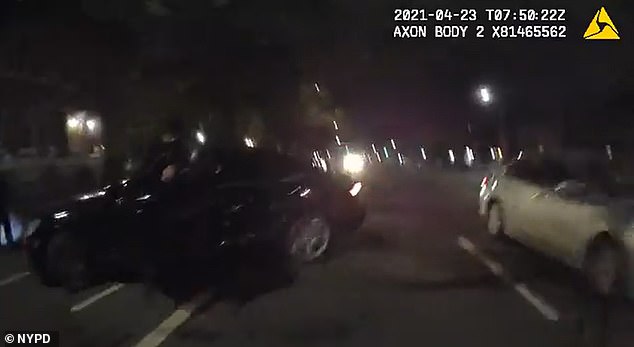 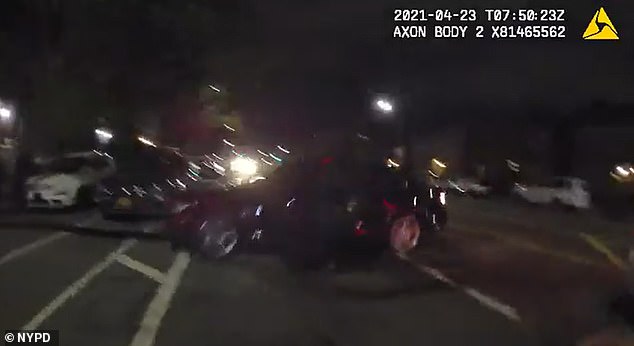 The officer was knocked off his feet as Newson reversed, in a chaotic scene in Brooklyn

On April 7 a judge in New York let him walk free, despite Newson’s own defense lawyer arguing a $50,000 bond would be appropriate.

Newson’s encounter with the police in Brownsville sparked a riotous sequence of events.

Speeding away from the scene and leaving the officer in the road, Newson drove for around 90 minutes to a house nearly 15 miles away, in Far Rockaway.

His ex-girlfriend and her mother were living in the basement of the house, after the owner took pity on them.

‘I thought I was opening my home up to someone who was in need,’ said the 66-year-old woman who lived there.

‘It turned into hell. A living nightmare.’ 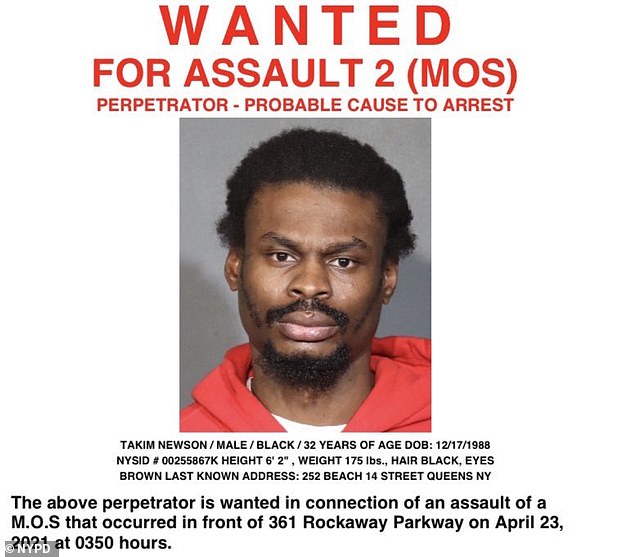 Newson broke into the house, smashing through the lock on the door, police said.

He allegedly threatened the 66-year-old woman, pretending he had a gun in his pocket.

‘He threw the plants around at me and my son,’ she said.

‘It was scary. It was very scary.’

He then left, without taking anything, when the police showed up.

Newson then made his way on foot to nearby Beach 13th Street, where he allegedly stole a green Jaguar S-Type sedan at around 5:30am.

The owner of the luxury ride left it running to warm up before heading to work.

Dermot Shea, commissioner of NYPD, tweeted: ‘NYC: @NYPDDetectives are AGAIN searching for Takim Newson after he used a car to assault a police officer early this morning.’

Newson was finally caught at around 3pm by Suffolk County police on Long Island, where his father is believed to reside.

Newson, a reputed member of the Edgemere Crew gang, has a rap sheet listing more than 20 prior arrests, sources told The New York Post.

Two of those cases – which involve allegedly shooting at police in 2008 and another shooting in 2011 – are sealed.

Newson served a three-and-a-half-year prison sentence for an armed robbery in Nassau County before being paroled in 2011, according to the Department of Corrections and Community Supervision website.