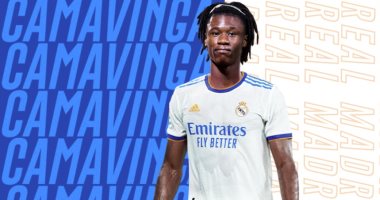 Real Madrid announced that its new French player, Eduardo Camavinga, coming from the Rennes team, will be presented to the fans and the media, tomorrow, Wednesday, at twelve thirty in the afternoon.

Real Madrid signed the young Camavinga from Rennes, in the last hours of the last summer Mercato, after he signed his 6-year contracts, in a deal worth 30 million euros.

The French youth deal is the second deal of the royal club during the last summer transfer market, after he included the Austrian star David Alaba in a free transfer deal, after the end of his contract with his former club, Bayern Munich.

Camavinga participated in 88 games with the first team of Rennes, despite his young age, during which he scored two goals and made 5, and Camavinga represented the French first team on 3 occasions and scored one goal.

The young Frenchman, Eduardo Camavinga, showed his happiness after ending his move from Rennes to Real Madrid, and wrote on social media, alongside a picture of the Madrid shirt, “Dreams come true.”

The new Real Madrid midfielder said goodbye to Rennes and its fans on social media with a video reviewing his career.

“Thank you all, my heart is full of passion and my head is full of beautiful memories, I officially announce my departure from Rennes, after eight wonderful years, it’s time to say goodbye,” he wrote.

Camavinga said he was grateful to the French club for what he had learned from him both professionally and personally, and stressed that he would always be “a member of the family”.