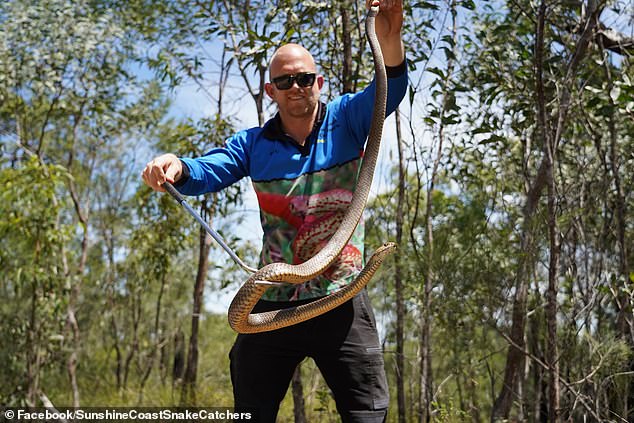 ‘A large six-foot-long brown snake decided to go for a dip in the waves at Mooloolaba Beach out the front of the Surf Club,’ he explained.

The snakes, among the deadliest in the world, are responsible for killing more humans than any other species, with untreated bites causing death in just 30 minutes. 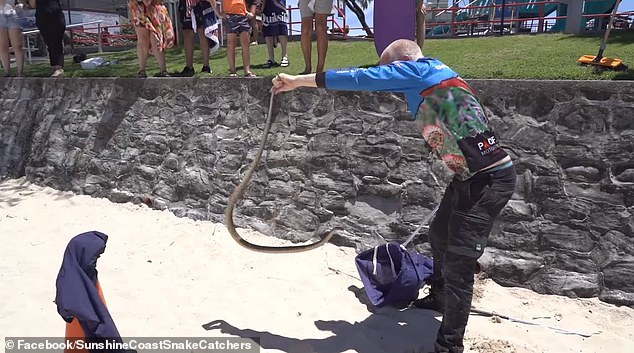 The deadly snake swam in the ocean before curling up inside a drain on the beach’s rock wall. Mr McKenzie was forced to pull the snake out of the tiny hole (pictured above)

Mr McKenzie said the ‘beauty’ was ‘tricky to catch’.

‘The lifeguards and people in the area went above and beyond, doing a fantastic job at keeping an eye on the snake and alerting the public,’ he explained.

‘Just goes to show that even our slithery residents love a swim at the beach.’

MrMcKenzie shared a video of the daring rescue to social media and began recording himself during the car ride to the beach.

‘We’re just racing down to Mooloolaba Beach, there’s a big brown snake right near one of the kids playgrounds and right out the front of the surf club,’ he said.

‘Luckily we were in the car when the guys called so we’re not far, we’re hopefully going to race out and grab him before anything bad happens.’

As Mr McKenzie ran towards the beach a group of lifeguards pointed to a rock wall and told him ‘it’s definitely a brown snake, it’s in the drain curled up’. 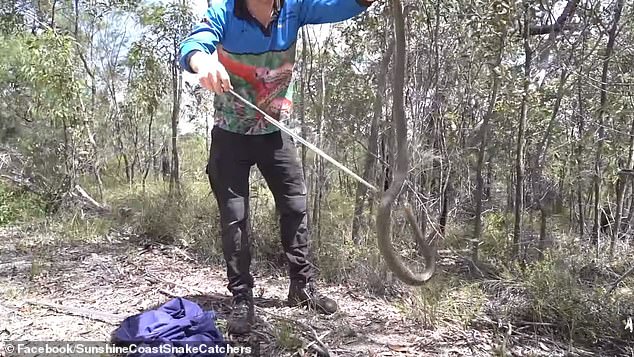 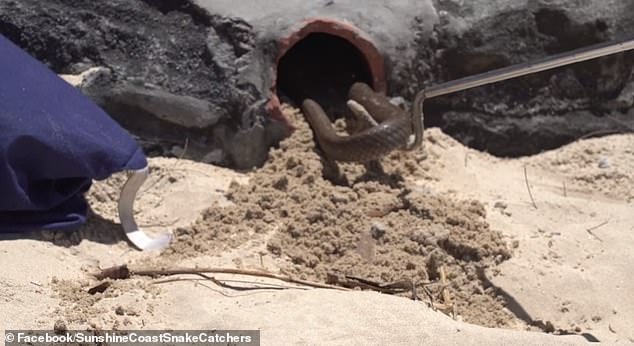 The snake catcher pulled out a long metal rod with a hook at the end and began to poke the inside of the drain hole.

He moved sand and debris out of the drain before snagging the back of the snake and pulling him out on the hook.

Mr McKenzie then grabbed the tail and held up the writhing snake.

‘He went for a swim earlier but he does not need to be here, that’s for sure.’

The snake was placed in a deep blue bag and later released into the wild.

‘Please keep an eye out for snakes around our recreational areas this Christmas and school breaks,’ Mr McKenzie warned.

HOW DEADLY IS AN EASTERN BROWN SNAKE?

Eastern brown snakes can grow up to 2.5 metres in length

Untreated bites can kill a human in just half an hour

Brexit: PM vows to focus on 'levelling up country' after securing deal