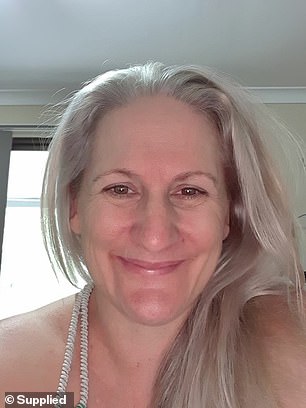 At just 45, Trudy Vains, from Burpengary near Brisbane, has cheated death multiple times

An Australian mum has opened up about her four brushes with death – from having her drink spiked and getting hit by a car to being brought back to life on the operating table after a traumatic miscarriage.

Trudy Vains, from Burpengary 35km north of Brisbane, has cheated death on more occasions in her 45 years than the vast majority of people would in several lifetimes.

The driver – who was doing 10km above the speed limit – failed to slow down at a set of traffic lights and hit Ms Vains on the left side of her body, sending her flying three metres into the air.

‘I hit the windscreen and flew like a rag doll,’ she said. ‘A witness told me my “broken” body landed on the road.

‘When the ambulance arrived, I was going in and out of consciousness. I was laying on the road in a limp heap with blood and glass all over the road.’

Ms Vains’ leg was so badly broken in two places – the fibula and tibia – titanium rods had to be inserted into the two bones.

She also suffered total memory loss from the crash and still can’t remember any moment of her life prior to the collision.

‘I was able to tell ambulance officers my name, date of birth and who my family was, but that was it,’ she said.

‘I remember vividly seeing everything in slow motion, voices were heard like they were talking underwater.

Ms Vains also suffered total memory loss from the car crash, and to this day can’t remember any moment of her life prior to the age of 13

‘They say life flashes before your eyes, but I don’t remember a thing from my life before this day, even now at 45 years of age.’

‘Sometimes I will have an odd thought pop into my mind, or I will say something quite random like “oh my brother played cricket on that oval”,’ she said.

Four years later, at age 17, Ms Vains had another brush with death while driving home from a theme park on Queensland’s Gold Coast.

Ms Vains was in the front seat of the car when the driver and all four passengers fell asleep.

‘The driver fell asleep going 100km/h on the highway and they veered off the road into a tree that was on the central median strip,’ she said.

‘The airbags went off and I woke up to the sound of metal crunching and my body being forced around by the airbag.

‘The car was completely written off. No one should have walked away [alive] from the crash.’

Ms Vains said she was stunned that she and her four friends survived.

She had a spine fusion in November 2019 as an ongoing result of the car accident.

The yoga instructor came close to dying for a third time in November 1996, when she was 26 weeks pregnant with her first son.

The yoga instructor’s third brush with death came in November 1996, when she was 26 weeks pregnant with her first son

The mother-of-one said she ‘felt in my bones’ something was wrong, before heading to hospital.

‘There was a lot of bleeding and even after many visits to the doctor and the hospital, no one could tell me what was happening,’ she said.

‘The whole time during labour, my son’s heartbeat could be heard. But I was told – and I knew deep within me – that he would not survive the outside world.’

Ms Vains had suffered a placental abruption, which caused her placenta to ‘come away in pieces’.

‘In my case, it came away in the form of clots, which is what triggered my labour. There was nothing that anyone could do to stop it; the baby was coming and that was that,’ she explained.

After losing a dangerous amount of blood, Ms Vains’ heart stopped and she had an eerie out-of-body experience.

‘I remember vividly being above my own body and looking down, and someone was zipping a body bag around me. Obviously this did not actually happen,’ she said.

‘It was quite surreal, I felt very light and as though everything had left me.’

However, doctors were able to bring Ms Vains back to life with a defibrillator.

‘I do not recall hearing anything, it was only a momentary sensation, feeling, and then I was back in my body,’ she said.

‘There was no “light” that people talk about when someone passes. It was just a sense of floating and totally free.’

Death knocked at Ms Vains’ door again a decade later, when her drink was spiked at a 60th birthday, causing a paranoid episode that led to her trying to jump out of a moving car.

Ms Vains and her husband of 22 years, Craig, attended the sit-down dinner on a rural property in Queensland when she was 27.

‘I remember putting butter on my bread roll, but after that my memory goes in and out,’ she said.

Craig told his wife she was dancing ‘inappropriately’, and tried in vain to get her to sit down.

‘I tried to run but then fell and got back up,’ she recalled.

After losing a dangerous amount of blood due to a serious complication while pregnant, Ms Vains’ heart stopped and she says she had an eerie out-of-body experience

Death knocked at Ms Vains’ door again a decade later, when her drink was spiked at a 60th birthday, causing a paranoid episode that led to her trying to jump out of a moving car

‘I was hellbent that I was getting in the car and going home at this point as there was an urgency to get away. I felt like someone was going to kill me.

‘Craig followed me – he was quite drunk and thought I was acting odd – but he couldn’t put his finger on what was wrong.’

Becoming increasingly paranoid and erratic, Ms Vains attempted to walk home but passed out in the middle of a country road.

‘When I did wake up again, I heard someone say that the neighbours had complained about the noise, and if I didn’t calm down they were going to call the police,’ she said.

‘I truly felt a surge of fear run through me. I told Craig we had to leave right now, I felt that someone wanted to hurt me or rape me or kill me.’

Craig put his wife in his car, but as they were driving away from the party, Ms Vains attempted to get out of the moving vehicle.

‘I could feel the wind in my hair… I had a feeling run through me that I thought I could fly,’ she said.

She gave up drinking immediately after the party, and won’t so much as take a Panadol for fear of having an adverse reaction

‘It was a real feeling of euphoria – something that I do not want to experience again. It was like I could do anything and not be harmed, I truly just wanted to fly.’

Ms Vains was just seconds from leaping onto the gravel road before Craig managed to lean over and close the door.

Ms Vains said she tried several more times to jump out of the car before the couple eventually made it home safely.

The following day, Ms Vains’ doctor tested her and concluded she had a common date rape drug in her system.

‘I hate to imagine what could have happened to me if my reaction had not been as aggressive,’ she said.

Ms Vains said the ‘awful’ incident has left her with lasting psychological harm.

She won’t so much as take a Panadol for fear of having an adverse reaction.

As a result of her many near-death experiences, Ms Vains has changed her outlook on life.

‘I feel like I have eyes in the back of my head and am always on alert,’ she said.

Now working as a doula after dedicating her life to coaching women through childbirth, gave up drinking after the spiking incident.

‘I’m still terrified that something like this could happen again and I see a therapist about it,’ she said.

‘I am very careful when I cross the road, and have panic attacks if I hear sirens in the distance.’

Ms Vains said she also avoids driving on the highway as much as she can, and also steers clear of overcrowded areas or ‘any place that feels unruly’.