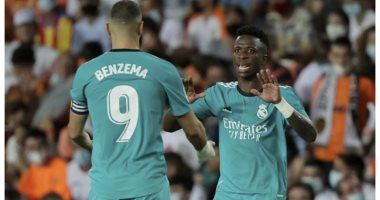 About ten months have passed since Karim Benzema’s famous talk with his colleague and compatriot Ferland Mendy, the Real Madrid duo, between the halves of one of the matches of the last edition of the Champions League, in which the veteran striker said to his colleague about Vinicius Junior: “Do not play with him, he is playing against us.” .

The situation has completely changed since that saying, after Benzema asked Mendy not to play with Vinicius, the two players are now forming a strong attacking duo in the Spanish first division, “La Liga”, and they understand each other’s movements without even looking at each other.

The Real Madrid duo scored 11 goals (6 for Benzema and 5 for Vinicius) in five La Liga rounds, more than the goals of the rest of the La Liga teams this season.

Valencia has 10 goals in the league this season, followed by Rayo Vallecano with 8 goals, the two teams closest to the goals of Benzema and Vinicius.

The start of the Spanish League is witnessing unlimited cooperation between the French and the Brazilian, who are taking advantage of their speed and ability to dribble, and in turn, they are the perfect duo in La Liga this season.

And there is no player in the major European leagues who has played his mission as a leader for his team as Karim Benzema did. The Frenchman leads the league’s top scorer with 6 goals, in addition to passing five crucial balls to his teammates.

And between the two halves of the German Borussia Moenchengladbach match that was held last October, broadcast cameras caught a conversation with Benzema asking Mendy not to play with Vinicius, in protest against the Brazilian’s way of playing.

Benzema and Mendy’s conversation became the talk of newspapers and media around the world, but the French and his Brazilian colleague ended this dispute and exchanged friendly conversation and publications through social networks.

Despite these publications, the chemistry between Benzema and Vinicius this season did not exist before.

Vinicius has developed a lot this season, especially at the level of ending attacks, taking advantage of his great speed, which helped him improve his numbers and score 5 goals in 5 rounds of the Spanish League. He has never exceeded the 3 goals since his signing with Real Madrid.

In addition to his new identity as a top scorer and scoring the equalizer for Real Madrid in the Valencia match, the Brazilian passed a decisive ball that saved his team from losing two important points in the struggle to top the table.

Real Madrid players showed signs of fatigue in Sunday’s match, especially Brazilian Casemiro, who creates a state of balance within the team.

Italian coach Carlo Ancelotti was forced to withdraw Casemiro from the field in the 66th sq. and put Frenchman Eduardo Camavinga in his place, taking advantage of his physical strength and his wonderful start with the team.

In addition, Luka Modric and Federico Valverde played a lot of matches in a row, so they need to rest.

Next Wednesday, Real Madrid will host Real Mallorca in the sixth round of La Liga, which is a good opportunity for Ancelotti to rotate between the players and give some of the key players a rest.

And Ancelotti’s options in the defense line are very limited, due to the absence of Marcelo, Mendy and now Dani Carvajal due to injury.

As for the midfield, it is able to rest some of the basics, and count on Camavinga and Isco, in addition to the possibility of pushing Rodrigo Joyce or Marco Asensio in the front line.