The Liberal party was so decisively crushed that the result was declared just 42 minutes after polls closed on Saturday night with just 0.7 per cent of ballots counted.

His party’s nightmare scenario has become reality, with the party likely to be reduced to just two MPs and lose their opposition status to the Nationals who have five seats. 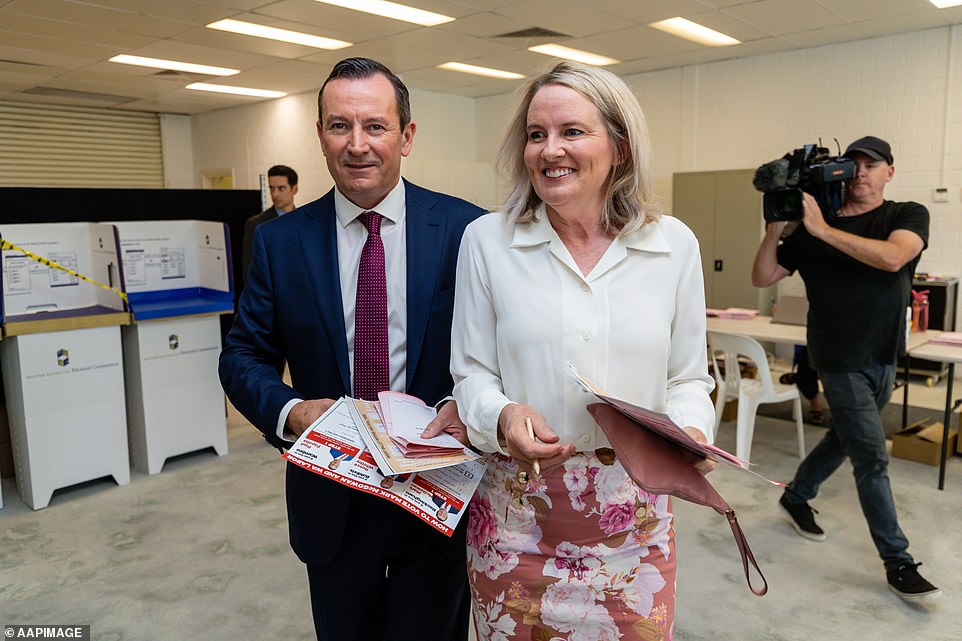 Mr Albanese said the win is not just about how WA Labor has handled the pandemic with its stiff border closures.

‘It’s about the way WA Labor have run the economy, they have produced surpluses, they have created jobs and they have kept West Australians safe,’ Mr Albanese told Sky News.

‘This is primarily about Western Australia but it has to be good new for federal Labor as well.’

He said the fact a branch of the Liberal party has essentially been wiped off the map shows that they are going to struggle with a lack of resources to run an effective campaign over the next year when a federal election is due.

‘Certainly their campaign in the state election was disastrous, and it’ll be the same people who are running campaigns on the ground during the federal campaign,’ he said.

‘They can fit people in a Mini.’

Mr Albanese, whose leadership has been under siege for months as he legs behind Mr Morrison in the polls, said the thumping victory gave him momentum.

‘The fact is many people have voted Labor for the first time. It shows they’re open to voting Labor and I take great encouragement from it,’ he said. 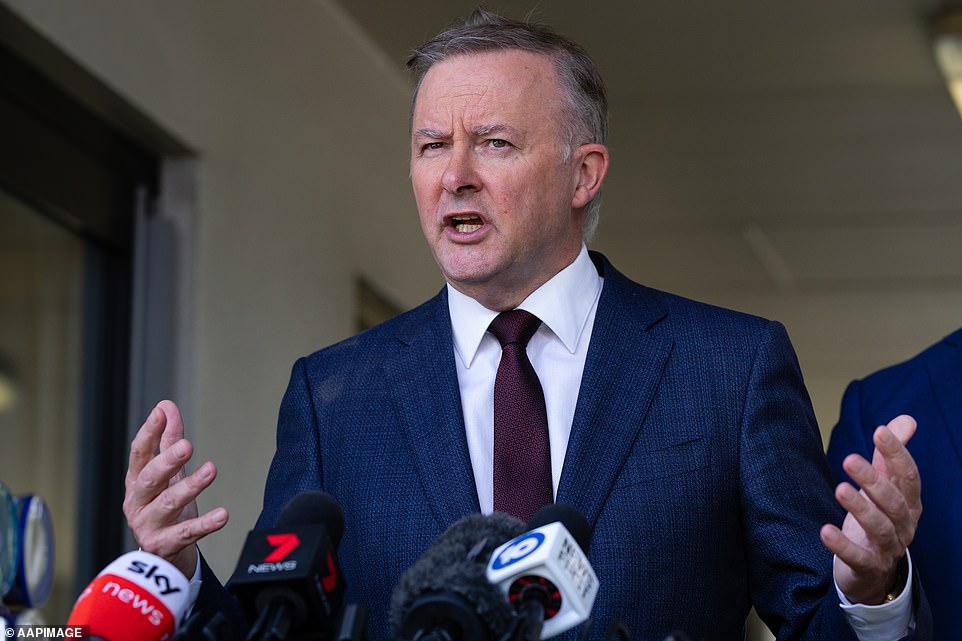 ABC pollster Anthony Green said the Liberal Party, both state and federal, would have a much harder time fundraising for the next four years with so few state MPs.

‘Parties rely on having people in some sort of job where they can work on party affairs while on a salary,’ he said.

‘The Liberal Party’s just lost nearly any sort of employment for their party apparatchiks in the state, so they’re weakened financially.’

Mr McGowan walked into his victory party to ACDC’s Thunderstruck with his wife, parents, and three children to tell a rapturous crowd he would be forever grateful for the people of WA.

‘The magnitude of what happened today is not lost on me. With it comes great responsibility,’ he said.

‘We will continue to deliver stable, competent, responsible and caring government for all West Australians.

‘To have the support and faith of so many West Australians in one of the most important state elections is a great honour.

‘Can I thank those people who voted Labor for the first time in their lives across Western Australia.

‘Can I also acknowledge West Australians who didn’t vote for us. I promise to work for everyone across Western Australia over these coming four years.’ 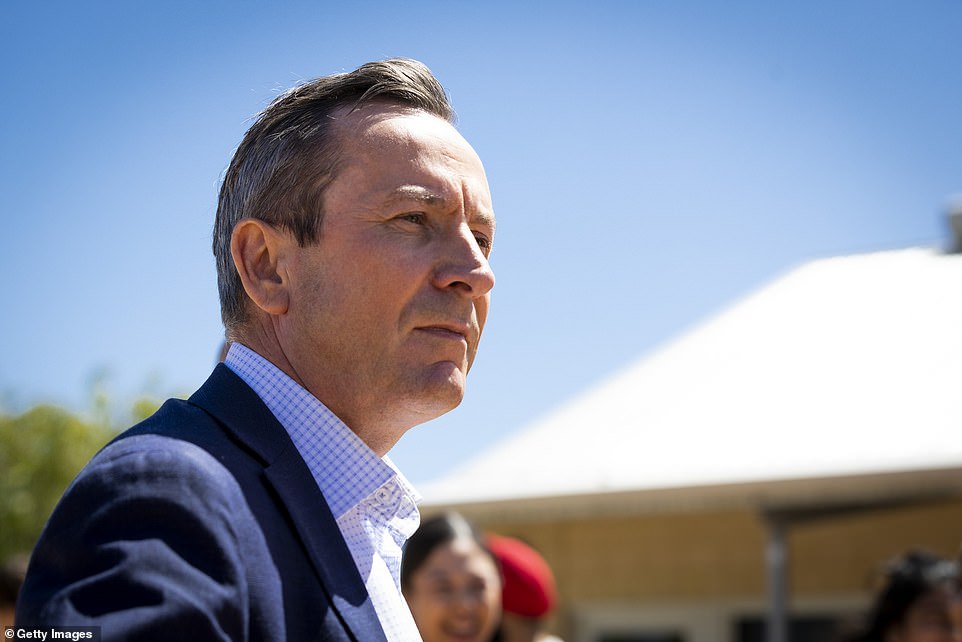 Mr Kirkup lost his marginal electorate of Dawesville, becoming the first WA Liberal leader to lose his seat since the 1930s. He reiterated that he would not seek re-election at a state or federal level.

‘It is a loss that will be difficult to bear,’ he said in his concession speech.

Mr McGowan was accompanied by his wife Sarah and their children for his victory speech.

‘This is a humbling experience. To every last West Australian who voted to re-elect this WA Labor government, thank you so much,’ he said.

The ABC’s electoral analyst Antony Green called the election for Labor with less than one per cent of the ballots counted and just 42 minutes after the count began. 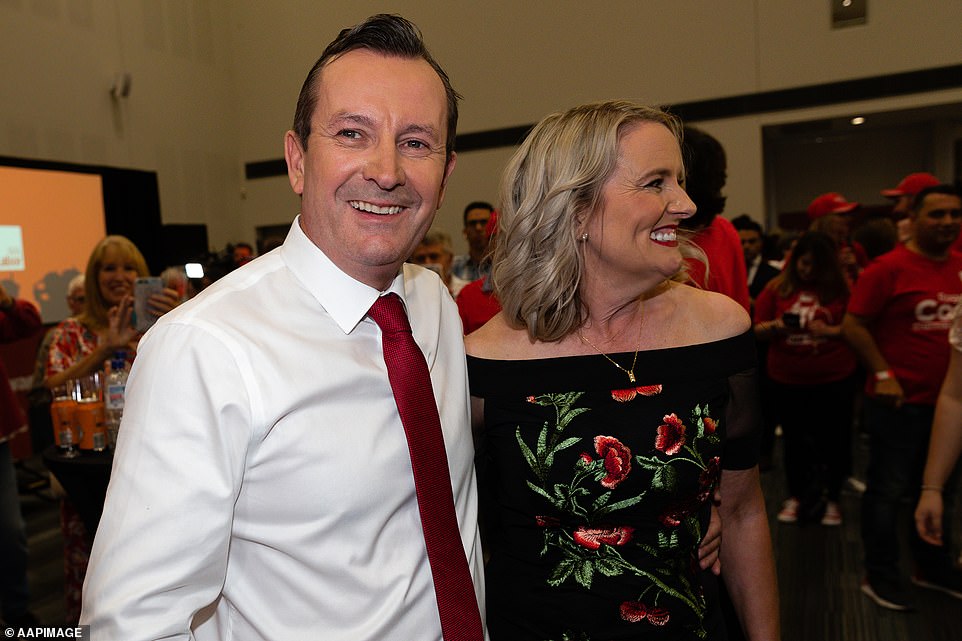 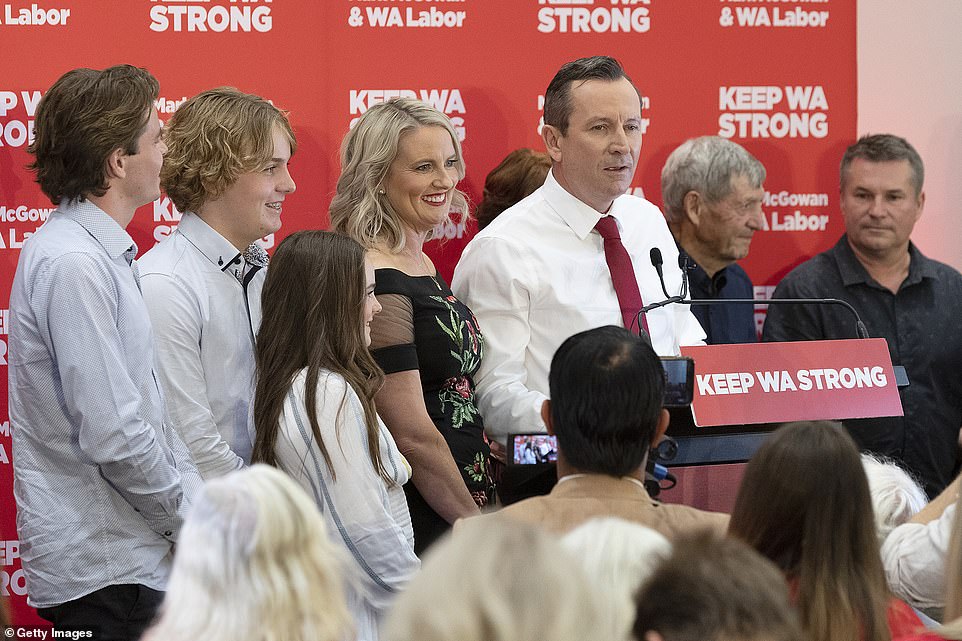 Early results showed a remarkable and quickly climbing double-digit swing to Labor and an almost 10 per cent fall in the Liberals’ vote.

‘With a very small number of members [in parliament] we must do all we can to hold Labor to account,’ he said.

The 34-year-old WA Liberal party leader added that he would not be returning to politics again.

‘Western Australians have overwhelmingly chosen to elect the McGowan Labor government for a second term in office,’ Mr Kirkup said. 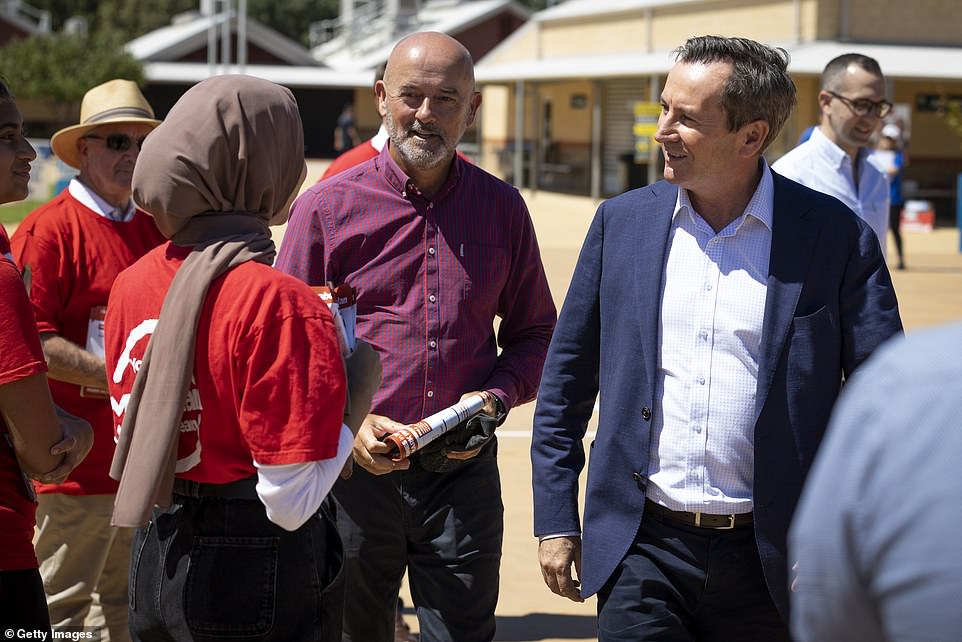 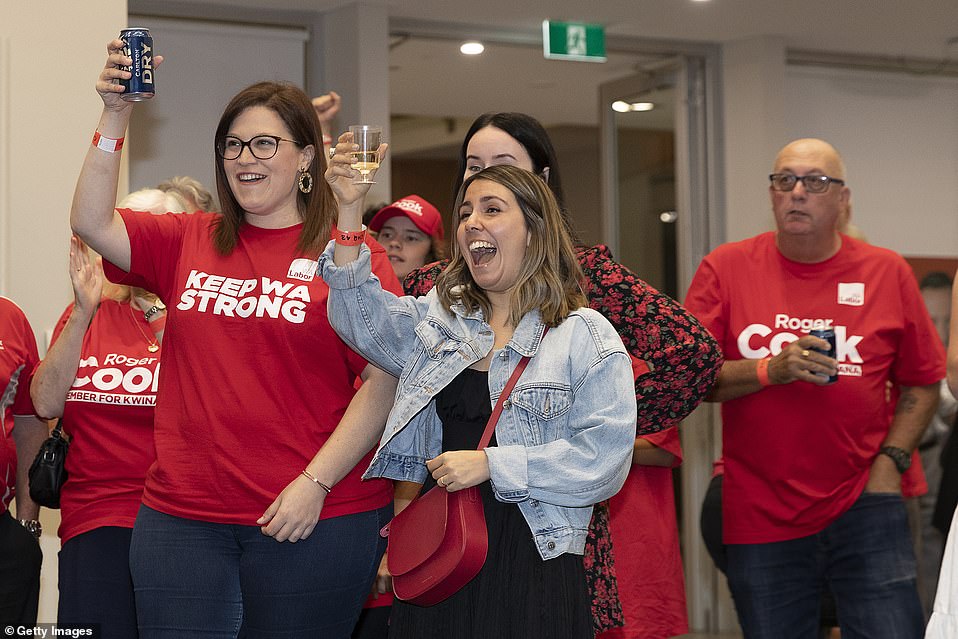 Liberal figures have called for reform as the party faces a wipeout in the state election, possibly holding as few as two seats – down from 13.

It also looks likely that the Nationals will become the official WA opposition, with more seats than the Liberals, with the party’s leader Mia Davies saying she was ready to step up.

‘If it turns out that’s how the number falls, I’ve said we’re ready for the challenge,’ she told the ABC.

‘We’ve been around for over 100 years, we have never shied way from a challenge, we’ll deal with that bridge and cross it when we come to it.’

Labor’s parliamentary majority could ultimately be the biggest held by any party in WA’s history.

‘This is a disaster, let’s be honest about it,’ retiring former Liberal leader Mike Nahan told the ABC.

‘This will be a cleansing for the Liberal party and it will be up to us to get our act into gear.

‘Unfortunately we (have) very few seats to work with.’

A call by the Liberals to open WA borders while the state continued to deal with Covid-19 had done ‘immense’ political damage, Dr Nahan added. 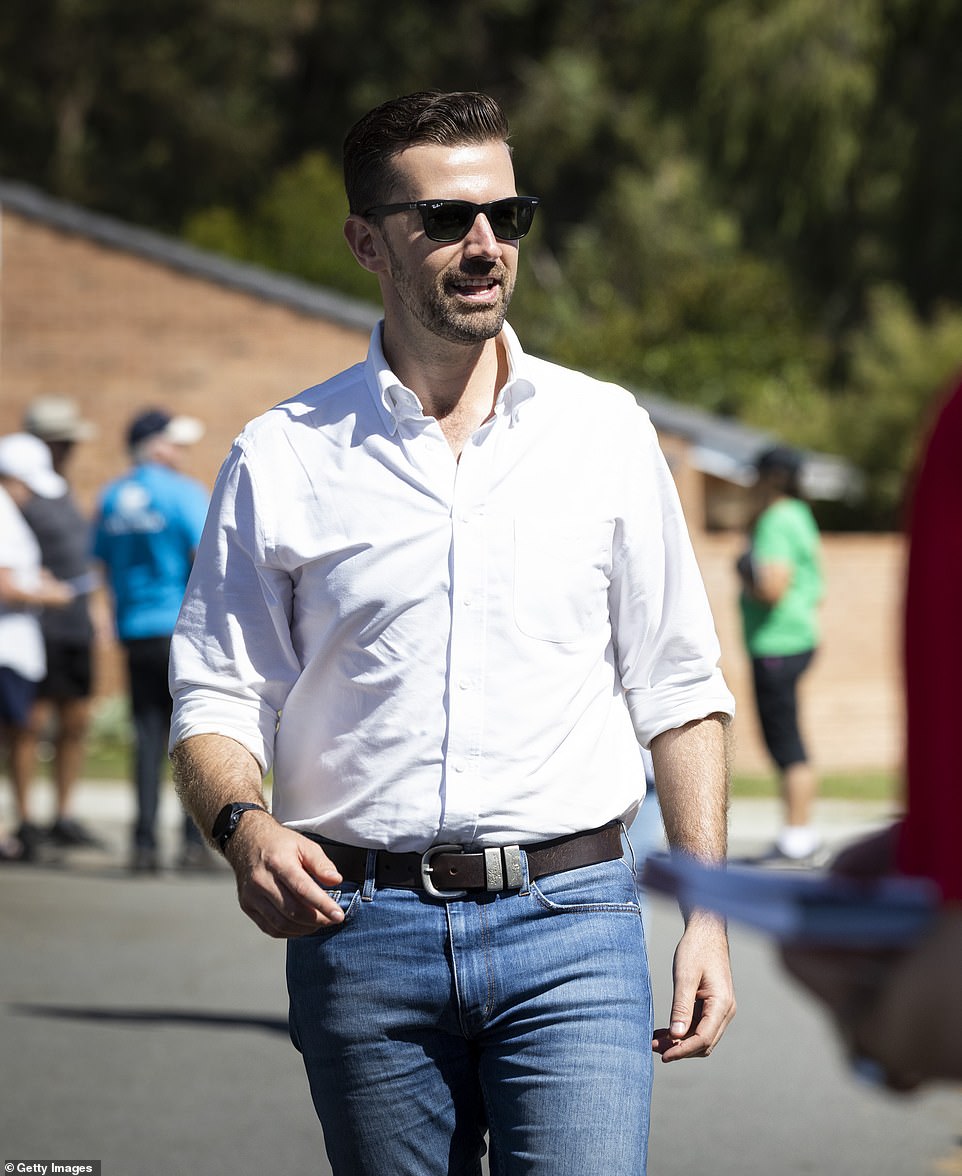 Retiring Liberal MP Dean Nalder said there were real concerns about the influence of conservative powerbrokers over the party.

‘There seems to be this sense of anger (among voters),’ he told Perth radio 6PR.

‘Some people feel that we lost sight of our values as a Liberal party and we need to regain that.’

Former Liberal MP Murray Cowper said the party would require a root-and-branch overhaul in the wake of the result.

‘We have a house on fire – do we let it burn to the ground and rebuild from the ground up?,’ he told Seven News.

Cheers rang out across Labor’s election-night function as results flashed up predicting gains in Kalgoorlie, Darling Range and Hillarys.

‘People are recognising that Labor’s a good government,’ he said. 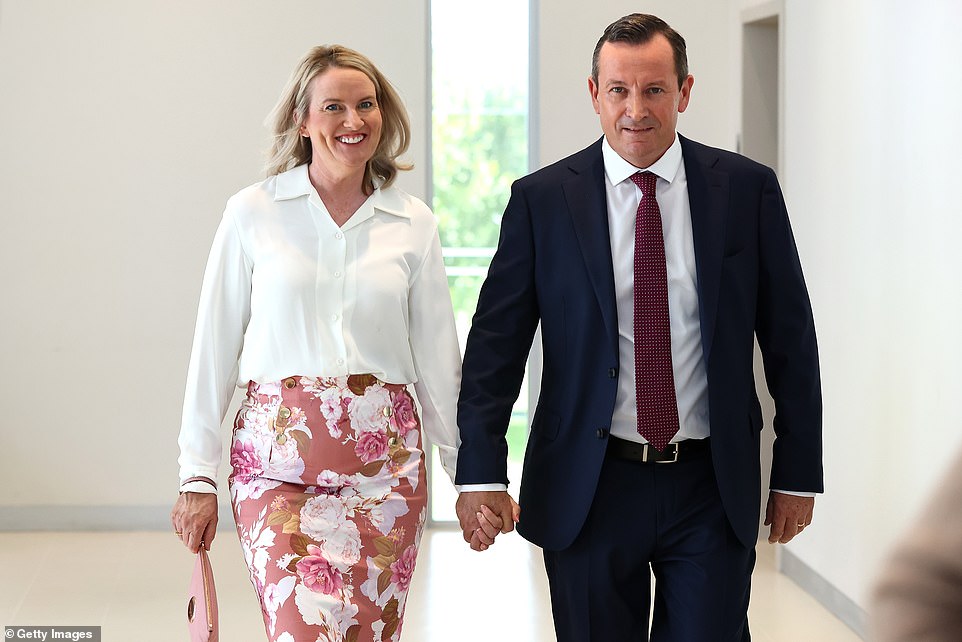 ‘Mark McGowan is a great premier and has led a good government that takes responsible and careful decisions and doesn’t act out of temper.’

Liberal MP David Honey’s safe seat of Cottesloe is one of the very few the party will have some confidence of retaining.

‘There are going to be some really excellent people who will possibly lose their seats,’ Mr Honey said.

‘The whole electoral cycle just turned to a vote on COVID or how well the government had handled COVID and that’s what we’ve seen coming through to this election.’

Federal Liberal senator Ben Small earlier told Seven News that anywhere between five and 10 seats being held by the party ‘will be celebrated’. 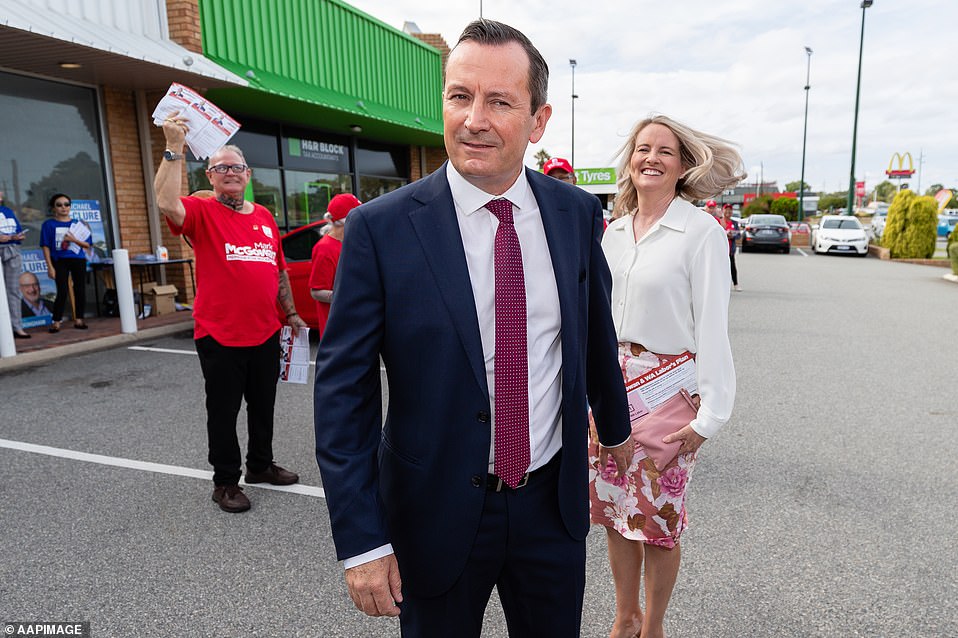 Mr Kirkup voted alongside his father Rob in his electorate on Saturday, saying he had no regrets about the Liberals’ campaign.

Asked whether he ever thought it was possible for the Liberals to win the election, Mr Kirkup – who took over the leadership in November – replied ‘probably not’.

‘The reality is, history would be going against us in any case – 1974 was the last time that a first-term government was voted out of office in Western Australia,’ he said.

Mr McGowan visited a polling place in the district of Hillarys, the Liberals’ most marginal seat and one that appears certain to fall to Labor.

The premier said Covid-19 had presented ‘one of the biggest crises the country and world has seen since the Second World War’.

‘It’s been an affirmation for me of the great spirit of our state and we want to have the opportunity to make sure Western Australia stays on its current pathway,’ he said.