Driver’s ban for meal on wheels: Woman, 50, is caught driving while holding a plate in one hand and eating with the other

A disqualified driver with 26 points on her licence was caught driving with no hands while eating her dinner.

Amy Richards, 50, drove through Guildford town centre holding her plate in one hand and eating with the other in October last year.

Officers noticed the car was untaxed and followed it before Richards, from Cranleigh, Surrey, swerved to the other side of the road. 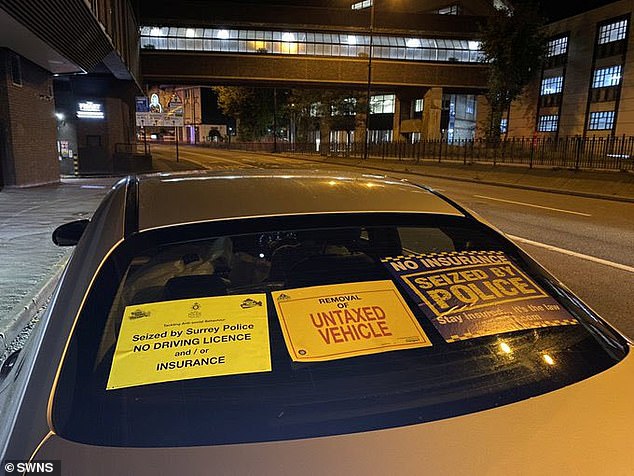 Amy Richards, 50, drove through Guildford holding her plate in one hand and eating with the other in October last year

She pleaded guilty to driving while disqualified, uninsured and not in proper control. She was given a further ban for two years and six points on her licence.

A spokesman for Surrey Roads Policing Unit said: ‘It’s taken over a year. On October 22, this car spiked our interest as it was shown untaxed. No biggie, run of the mill.

‘Whilst following the vehicle, it swerved onto the wrong side of the road.

‘When we pulled up alongside it, we found the driver holding her dinner in one hand and forking the food into her mouth with the other, all while driving through Guildford town centre. ‘Forking Hell’ we thought.

‘Once stopped, we confirmed that the tax had expired in July. Another check showed the driver wasn’t on the insurance either.

‘And finally, almost predictably, the driver is disqualified from driving until mid 2020 and had an ‘impressive’ 26 points on her license.

‘Three court sessions later and the driver pleaded guilty to all offences.’

Richards already had 26 points on her license for two speeding offences and failing to disclose details of the driver of a vehicle five times.

She must reapply to the DVLA and request a new driving licence before she is allowed back behind the wheel after her two-year ban.

A Surrey Police spokesman added: ‘Once the disqualification period of two years has ended, Richards will need to reapply for her license from the DVLA.

‘If this is granted, she will be permitted to drive again.’

Richards was ordered by the court to pay £287 in fines, costs and surcharges following her most recent offence.