An American writer has infuriated Twitter users after she proclaimed that one of the main reasons men are attracted to short women is because they seem to be easier to dominate and control.

Feminista Jones made the bold claims on Twitter this week, phrasing her tweets in a way that seemed to mock short women for ‘not knowing’ that this is why men liked them.

It wasn’t long before other Twitter users began criticizing the thread — and while the backlash has led Feminista Jones to delete her account, the criticism is still coming. 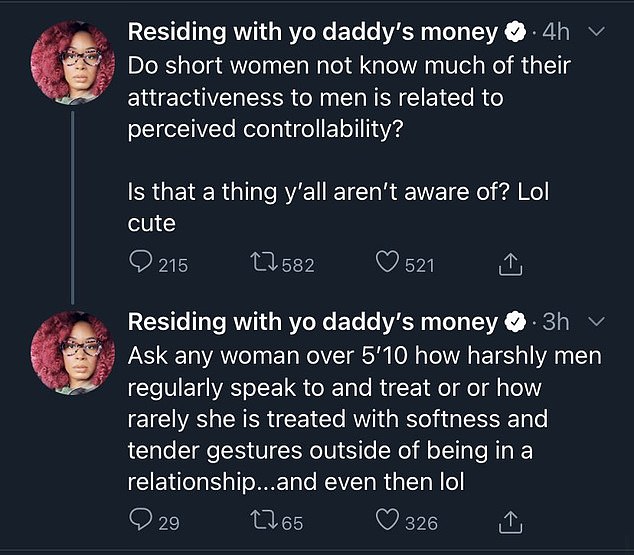 Controversial: Writer Feminist Jones tweeted this week that much of short women’s ‘attractiveness to men’ is related to ‘perceived controllability’ 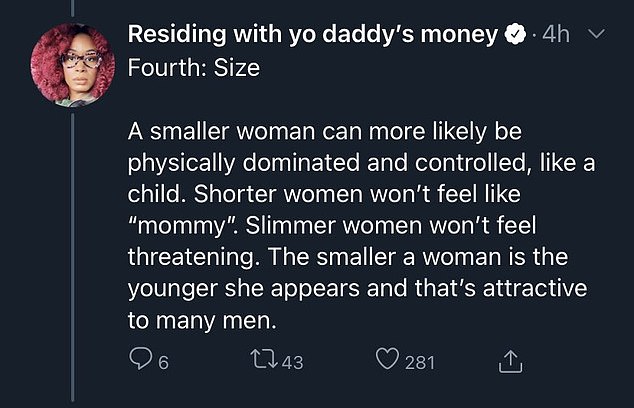 Hot take: She also mocked short women for ‘not knowing’ that, adding: ‘The smaller a woman is the younger she appears and that’s attractive to many men’ 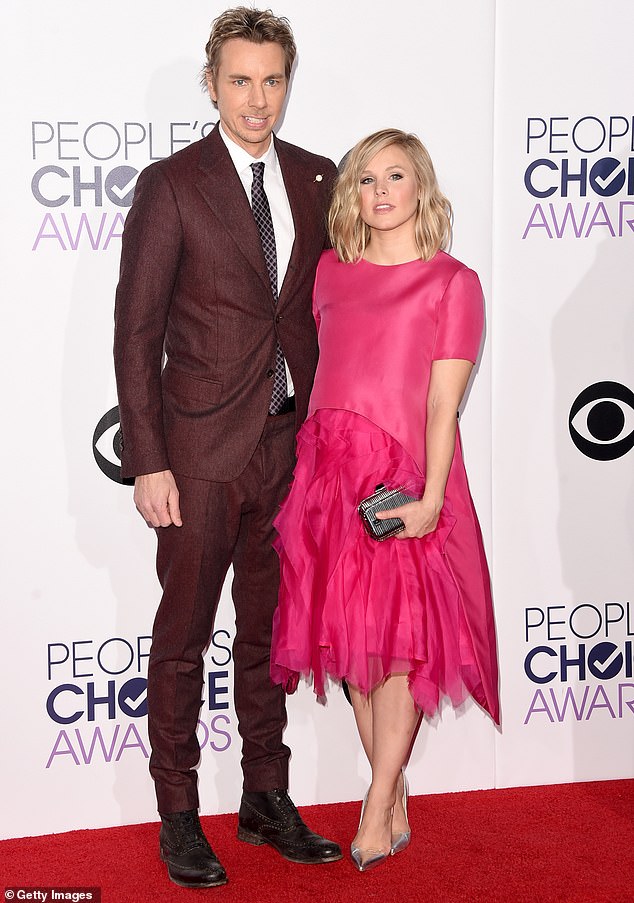 So that’s the case here, huh? Kristen Bell is about 5’1″, while her husband Dax Shephard is nearly a foot taller at 6’2″

‘Do short women not know how much of their attractiveness to men is related to perceived controllability?’ she wrote in the now-deleted thread.

‘Is that thing y’all aren’t aware of? Lol cute,’ she mocked.

‘Ask any woman over 5’10” how harshly men regularly speak to and treat or how rarely she is treated with softness and tender gestures outside of being in a relationship… and even then lol,’ she went on.

‘A smaller woman can more likely be physically dominated and controlled, like a child,’ she added. 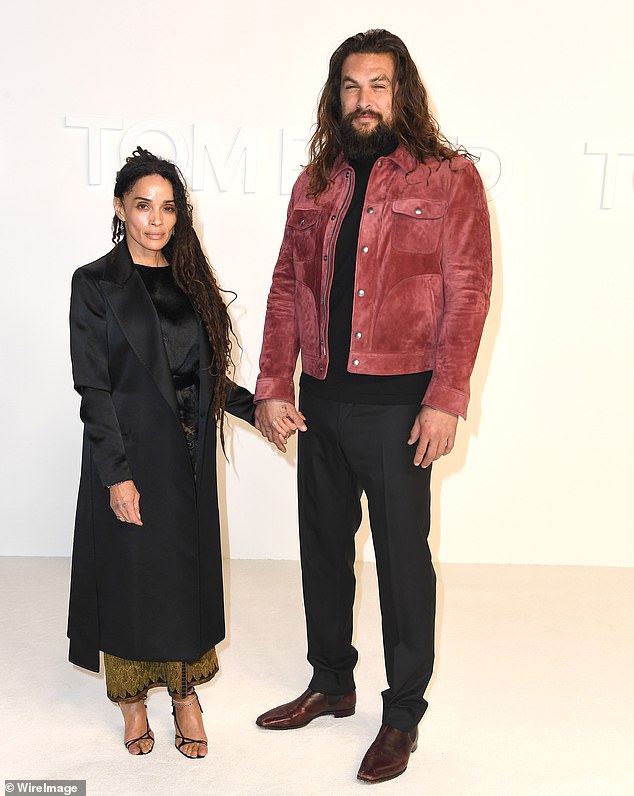 Over a foot difference! At 6’4″, Jason Momoa towers over Lisa Bonet, who is just around 5’2″ 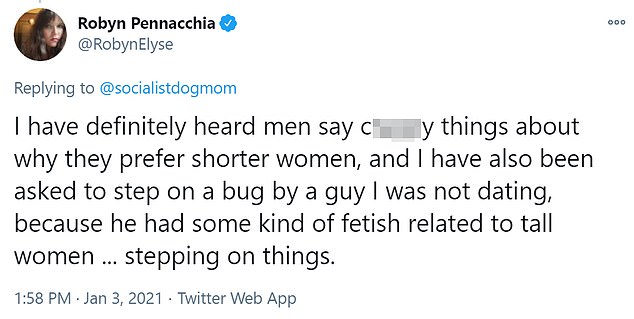 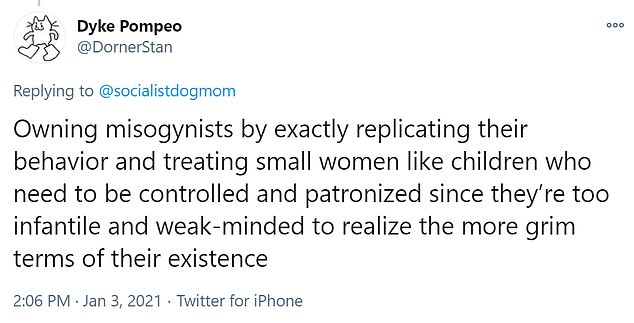 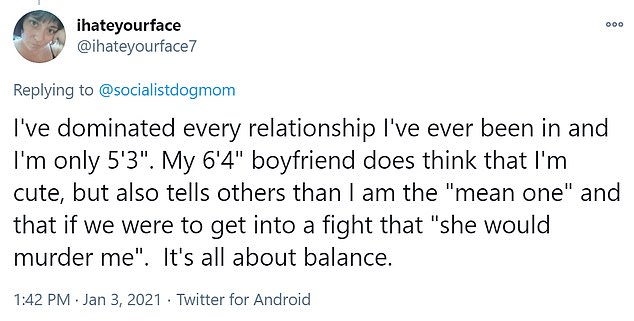 Not them! Commenters have passionately disagreed, with short women insisting men don’t perceive them as weak

Jones’ thread has been met with swift and furious backlash from Twitter users who point out that it’s not very feminist to body-shame or gang up on a group of women for their physical attributes.

‘Owning misogynists by exactly replicating their behavior and treating small women like children who need to be controlled and patronized since they’re too infantile and weak-minded to realize the more grim terms of their existence,’ wrote another Twitter user.

‘Love that she frames this as the fault of short women,’ tweeted another.

Yet another agreed: ‘So being short makes me… easy to control by men, but I should feel bad about this cause tall women don’t like it? Please give some constructive advice as to how I’m supposed to fix this.’ 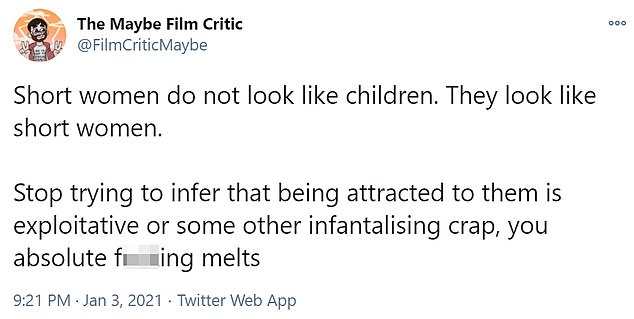 Disagree: Others have derided the idea that men who like short women are somehow predatory 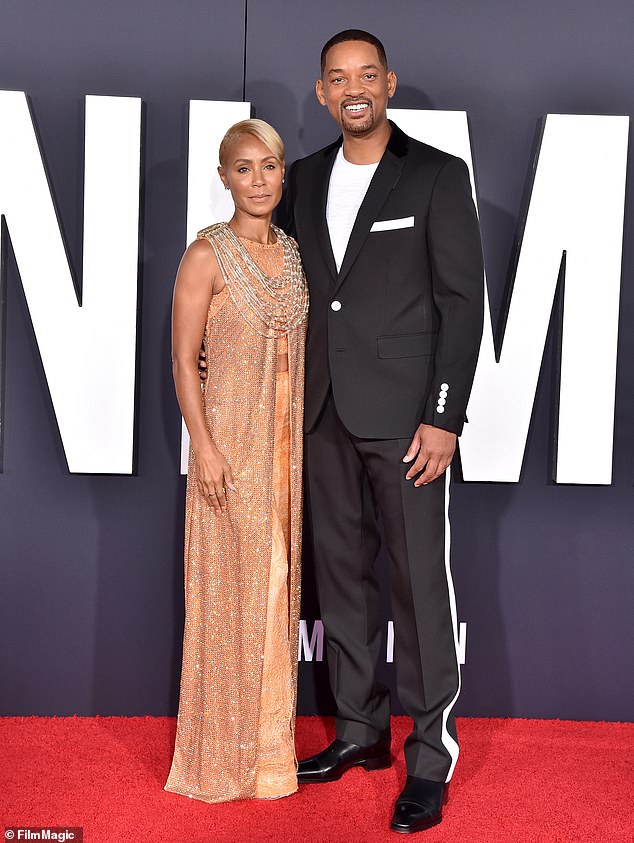 Works for them! Jada Pinkett Smith is just about 5′ tall, while her husband of over 23 years is about 6’2″ 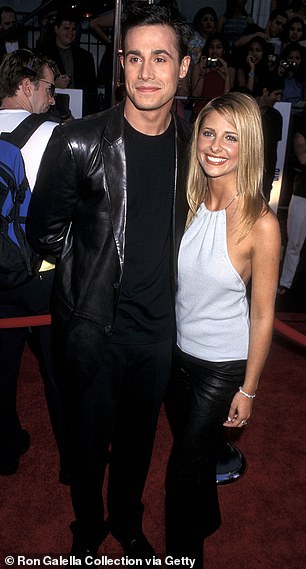 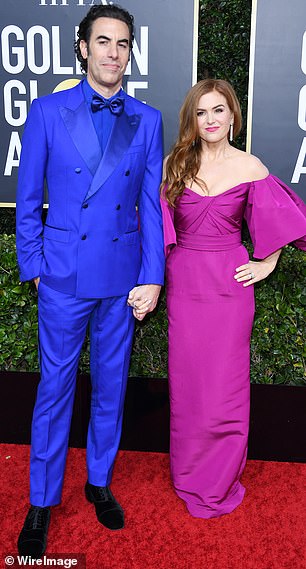 Partnerships: Freddie Prinze Jr. is about 6’1″, while his vampire-slaying wife Sarah Michelle Gellar is 5’4″; meanwhile, Sacha Baron Cohen is about 6’3″ to Isla Fisher’s 5’3″

‘I just don’t understand what short women are supposed to do about weirdos that are attracted to them, literally how is that my problem at all,’ said one more.

‘Why do I feel like you’re lecturing short women rather than creepy men? The “lol cute” here is so condescending,’ added another.

Others have disagreed with her assessment of men’s behavior.

‘I have definitely heard men say c***py things about why they prefer shorter women, and I have also been asked to step on a bug by a guy I was not dating, because he had some kind of fetish related to tall women … stepping on things,’ wrote one.

‘Short women do not look like children. They look like short women,’ another tweeted. ‘Stop trying to infer that being attracted to them is exploitative or some other infantalising c***, you absolute f***ing melts.’

‘It is entirely possible to have a discussion about your personal experience as a tall woman without outright saying short women are exclusively f***ed by pedophiles!’ complained another.

Quiet time: Others have just straight-out mocked her tweets. The backlash has caused Jones to deleted her account 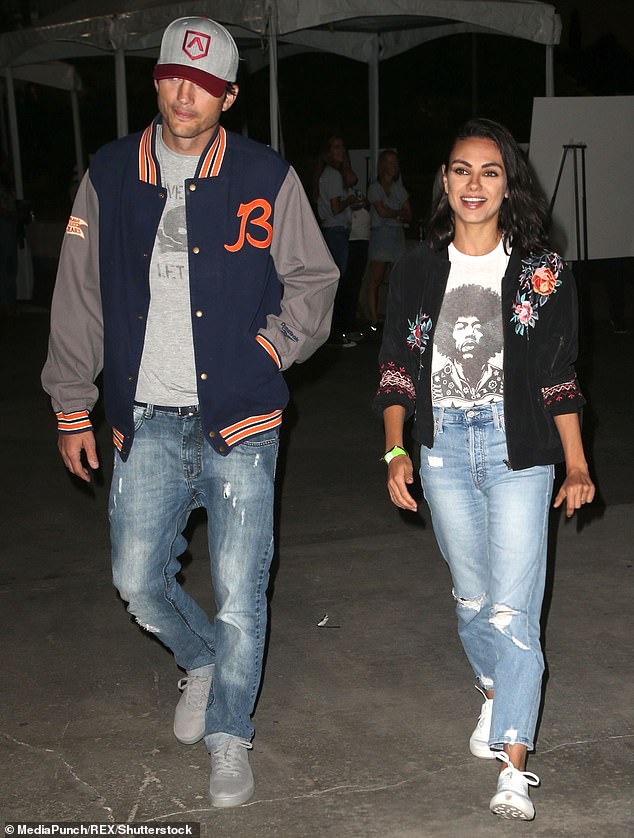 Mila Kunis is a petite 5’4″, but her husband Ashton Kutcher measures around 6’2″ 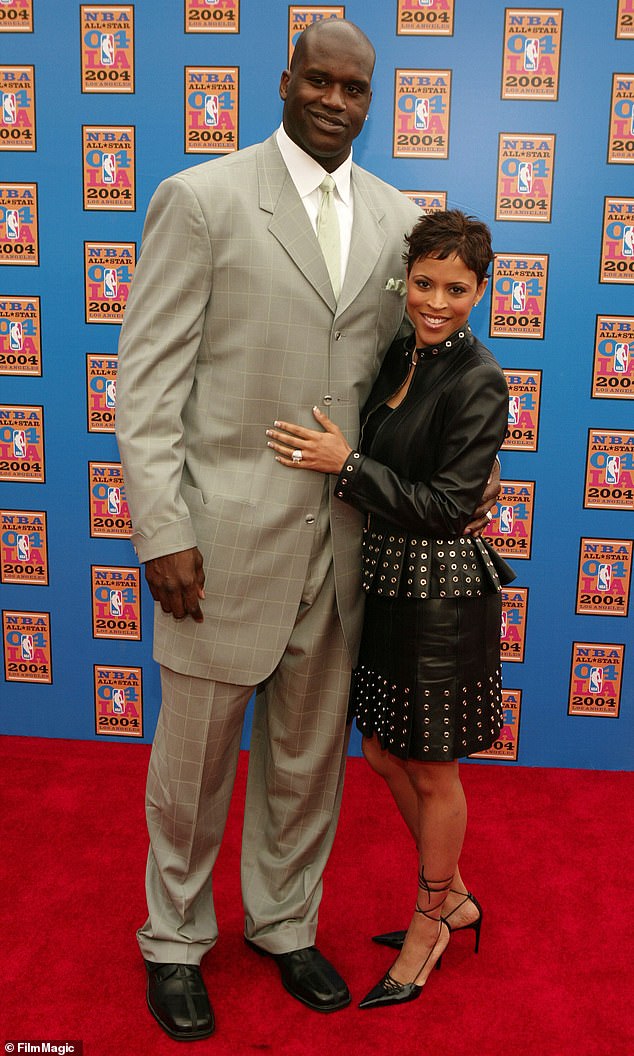 Heads above: Shaquille O’Neal’s ex wife Shaunie Nelson isn’t actually short at 5’7″ — but his 7’1″ frame would dwarf anyone

While several more pointed out that her characterization of women as seemingly easy to dominate doesn’t line up.

‘“Short women are easy to dominate” have you ever met a short woman??? The rage is concentrated into a lil package??? Human espresso?’ wrote one.

‘I’ve dominated every relationship I’ve ever been in and I’m only 5’3″. My 6’4″ boyfriend does think that I’m cute, but also tells others than I am the “mean one” and that if we were to get into a fight that “she would murder me”. It’s all about balance,’ said another.

Others have just straight-out mocked her tweets.

‘Do short women not know that they’re closer to satan than to our lord jesus christ in heaven?’ joked one more.

Preparatory arrangements for elections in Iraq

Chevron (NYSE: CVX) shares are advancing at the beginning of this trading week, and the technical...